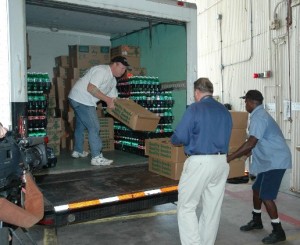 Have you heard the one about the trucker who got hijacked? Well, let me tell you – it wasn’t funny. Truck cargo theft and hijacking is on the rise, and the people committing these crimes are smart, organized and fearless.

Most cargo thieves are not hard-up drug addicts sneaking up on you at a truck-stop with a pair of bolt-cutters (although, of course, that can and does happen). Today’s thief is usually part of a carefully planned operation by a team of professionals who leave little room for error. The FBI has a special unit devoted entirely to major theft – and cargo theft is their number one priority. That’s how serious this has become, for them and for the trucking industry. In fact, security consulting companies are popping up all over, just to teach trucking companies how to protect their freight from this growing problem.

There are some major operations which have already been busted, but there are also some major investigations under way which involve long term undercover work to catch everybody involved in these unscrupulous networks. They have prostitutes to lure easy marks and/or stick-up men with guns; truck drivers to transport the stolen vehicle; locksmiths to get things opened; lumpers to unload; warehouses to store the merchandise; black-market fences to sell the products; and the list goes on. The good news is that the FBI is all over it, like the master sleuths they can be sometimes. But we in the trucking industry still need to take some precautions to stay safe out there.

There are certain areas where cargo theft happens more frequently, but of course, it can happen anywhere. Coincidentally, all of the so-called hot spots are the same exact places where drugs and prostitution are rampant – like Ontario, CA, Dallas, TX, West Memphis, AR, Gary, IN, Los Angeles, Chicago, Miami, New York and New Jersey. But, as I said before, it can happen at any truck-stop or rest area (or even a company terminal), anywhere in the country, at any time.

Cargo theft has always been a huge problem at truck stops and trucking terminals along the Mexican border, and still is to some degree, but most companies have learned to protect their property a little better in recent years. I talked to the chief security officer at Celadon Trucking, who also happens to be a local County Mounty in Indiana, and he said they had several trailers stolen right out of their supposedly “secure” parking lot in Laredo, Texas, before the company implemented a more rigorous security system. Cameras and sign-out sheets aren’t enough any more. Now, drivers have to show their ID’s and paperwork to get out with a trailer.

One company I used to work for had a policy that required drivers to drive non-stop for at least two hundred miles whenever they picked up a high-value load. Drivers were instructed to keep a sharp lookout behind them to see if they were being followed. If they thought they were being followed, they were instructed to go around the block, or get off then back on the highway going in the opposite direction for one exit, then check again to see if they were still being followed. If you are, of course, dial 911 right away. Hijackers will sometimes stake-out the shippers of high-value commodities and follow a truck until they get a chance to make their move. They don’t always hijack your truck at gunpoint. Most times they just wait until you leave the truck, then break in and hot-wire it.

Many companies don’t even report cargo theft when it happens to them – especially if it’s a lesser value load that was stolen. Companies just don’t want to let the word get out that they are vulnerable. Plus, their insurance rates would likely go up. So, you can be sure that any statistics you read are only a fraction of reality.

There is some very interesting information on the FBI website about it, too. Their investigative unit that handles this problem is always busy and there was never a time when there was not enough work for them to keep busy. Some of their investigations take up to a year and involve setting up fake warehouses and posing as criminal enterprises. This has worked in the past and is still working. And since knowing that any potential warehouse/fence location could be an FBI location just might deter some would-be thieves, they don’t mind saying so. They have task forces set up in most of the major crime areas.

What else can we do to protect ourselves, short of hiring an expensive consulting firm? Besides what I already mentioned, never drop a loaded trailer. It doesn’t matter if you are hauling something obviously valuable, like cell phones or tires, or something seemingly not so valuable, like plastic lids to soap bottles – truth is, an unattended loaded trailer is very tempting to the average thief with a tractor. He can find out what’s in it later, when he opens up door number two to see what he has won, after he gets the trailer back to his lair. And never tell anyone what you are hauling, especially if it happens to be TV’s or anything else with a high resale value. Plus, it helps to have a vehicle tracking system like Qualcomm or LoJack installed, which, of course, can find your trailer very quickly these days.

Of course, nothing is better than having a GPS vehicle tracking system on your truck or trailer. This way, if it ever gets stolen you can find it right away, without fail. Don’t buy a cheap one, find the best GPS vehicle tracking device, one that you know for a fact will find your stolen vehicle or cargo before it gets unloaded.

The top ten stolen items are food or food products, clothes or shoes, computers and related equipment, consumer electronics like TV’s and DVD players, tires, appliances, pharmaceutical products such as drugs, cosmetics and perfumes, wines and spirits, and cell phones (according to Freightwatch Group). The FBI also mentions tailored suits, frozen shrimp, computer chips and toilet paper, but also says that anything is a potential target.

So, whatever you are hauling, just remember that there might be a shadowy figure watching you, hoping you make a mistake, and ready to pounce. Watch your back out there and take every precaution. The days of leaving the truck running because you’ll be right back, or because you can see it from the window, are long gone. Thieves today are very quick, so please be careful out there and be prepared. Let’s make this year a safe and profitable year for all of us – but not the cargo thieves!

You heard it here first. Thank you for stopping by.