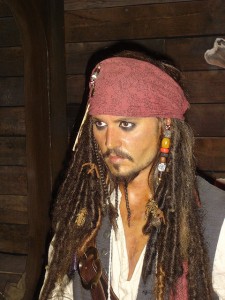 Who’s the Captain? 2-06. One fine day, not too long ago, I was trucking along a residential two-lane road. This particular road was going to come to an end in about one block, where it lead directly into the shipper I was heading for. There is no other reason for a truck to be on this road, other than to go there. The speed limit is 25 mph and the road is narrow (with nowhere to pull over) and has a lot of low-hanging trees.

An impatient truck driver behind me came around to pass, even though there is a solid yellow line. I was doing the speed limit (maybe a little over) when I saw him coming next to me. Because of the low trees on my side, I had to hit the brakes and slow down quickly. He blasted by me at about 40 mph, trimming a few trees on his side.

Not surprising, thirty seconds later I pulled up behind him and followed him into the shipping office. When we were inside, we got in line with two other drivers ahead of us. That was when he turned around to say, “I’m sorry I passed you back there, but my dispatcher doesn’t understand. He expects me to be here by this time and he just doesn’t understand that things don’t always go smoothly.”

I tried to be understanding so that it wouldn’t turn into an argument, but after a moment of understanding, I had to ask, “If you would have got a ticket for passing over that solid yellow line, would he have paid your ticket?” To which he replied, “Of course not.” Well, I had to wonder, who was the captain of his ship?

Then there was the time I saw four cars slide off the road at the same time on a snow-covered entrance ramp that looped around in a complete circle. The speed limit was 25 mph and all four were traveling as one, each one tailgating the next. They passed me as I was approaching the ramp, then, took the turn too fast, together. Luckily, it was a very mild decline into a safe little ditch that they slid, as one, without ever having any contact with each other. I was sure that no one got hurt, but just had to laugh at the thought that maybe now they would learn not to tailgate or blindly follow another driver like that. I could understand one car losing control, but three more drivers put their lives in the hands of the driver in front of them when they decided to follow so closely. Again, I wondered, who was the captain of their ship?

Then there was the driver who always cheated on his logs. He regularly accepted runs that he knew he couldn’t complete legally. He never refused a load – not because he needed the money, but because he wanted to appear dependable to his company. He liked being thought of as a driver they could always count on to get it there, whatever it took. He always straightened out his logbook the next day, when he found the time to sit down and try to figure out how he could make it look possible to do what he had done. Then, when the company was inspected by the DOT, they not only fined the company, they fined the driver as well. He was flabbergasted when the company wouldn’t pay his fine too. He still works there and still takes those illegal runs. It’s not like they would fire him. I worked there too, and regularly changed my appointments without any problems. It made me wonder, who was the captain of his ship?

Then there was the driver who complained about everything. He could (and would) always tell you who didn’t know anything about what they were doing, and how their ignorance made his job difficult. For over twenty years he complained to all of the drivers he worked with.

Everyone came to know him as the guy who always complained but never actually did anything about what he was complaining about. I always wondered why he kept working there. I also wondered who the captain of his ship was.

Have you heard the one about the driver who fell asleep and wound up in a ditch while hauling a hot load? This delivery really had to be there, first thing in the morning. The driver had the hours to do it legally, but he really hadn’t slept at all. His company knew he had the hours and thus (they were protected legally) instructed him about how important the load was. They insisted on a verbal commitment to deliver on time, before they let him have the dispatch. I think you can guess the rest of this one.

How about the driver who always takes overweight loads? You know the story by now: he gets a ticket, the company doesn’t pay it, he feels stupid, and I wonder, who is the captain of his ship?

I think we all bend the rules from time to time and we all push the envelope as we struggle with the fine line between a safe and legal (and profitable) business. I’m sure I have made some mistakes in my life too that had people wondering who the captain of my ship was. But we should never forget who gets in trouble when it comes down to it. The driver has the wreck, or gets the ticket and the fine, every time.

Be the captain of your ship. Have rules of your own, a line drawn, that you simply won’t cross. Speak up, they’ll understand. After all, you are the one responsible for the ship and its contents.