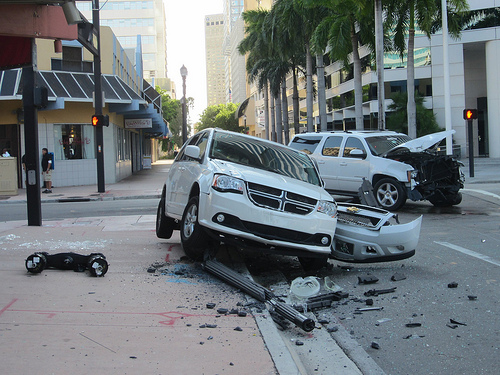 In all my years of trucking, and driving in general, I only had a few small accidents. I am proud to say that none were my fault (well, almost none). However, being in the right doesn’t automatically protect you from the problems that result from an accident. Injuries and vehicle damage notwithstanding, sometimes people lie, and sometimes the police report doesn’t agree with your version of what happened.

In 1998 I had a bad accident. It wasn’t exactly bad for me, but it was terrible for the guy who hit me. He went through a red light and broad-sided my truck. He totally destroyed his car, and didn’t have any auto insurance. Both he and his passenger busted their heads open on the windshield. They were not hurt seriously, but they were both bleeding. Nothing happened to me, and very little damage occurred to my truck.

As the crash was happening, I looked at the traffic light again and saw it was indeed still green. (It’s funny how things seem to happen in slow motion sometimes.) So, I knew for a fact he was the one who ran the red light. However, as soon as he got out of his car, the first words out of his mouth were, “You ran the red light!”

I immediately looked around for witnesses. I saw about ten women who had just gotten off work at the factory on the corner, waiting at a bus stop and went to talk to them. Several of them told me they saw the whole thing and that he was the one who ran the red light. I gathered a few names and phone numbers to protect myself.

Fortunately for me, his lawsuit attempt failed, because I had witnesses. But what if there weren’t any witnesses? I’m not sure how this would have turned out. It would have been his word against mine.

Sometimes the Police Report Doesn’t Match Your Story
Chicago, 1981: I was a young man, about seventeen when I had a crash with a motorcycle. I was turning left when he tried to pass me on my left. He hit the left-rear corner of my car and rolled his motorcycle over my car, breaking the leg of his female passenger.

During the police investigation, it never dawned on me that it could be my fault. I had my signal on, waited for traffic to clear, and made a left turn. In the middle of my turn, I glanced in my left side mirror and saw the motorcycle coming around me. I stopped immediately, but instead of passing me, he just hit my car.

I didn’t hear him give his story to the police officer, and never knew until weeks later that he claimed I didn’t use my turn-signal.

It was a company car, and my employer eventually had to pay for the damages on his motorcycle, along with the hospital bill. Even though he was passing me at an intersection, where no passing was allowed, somehow it was my fault.

What could I have done to protect myself? Well, some pictures would have done it. Maybe if I had a witness or two, that could have made the difference as well.

Be Prepared
It’s a good idea to assume that one day you will have an accident. It’s just a matter of time. I read somewhere once that the average driver has one or two serious accidents in their life. With that in mind, it’s a good idea to keep a disposable camera in your glove compartment, along with a pen and paper to write down witnesses names and numbers.

And of course never drive without auto insurance.