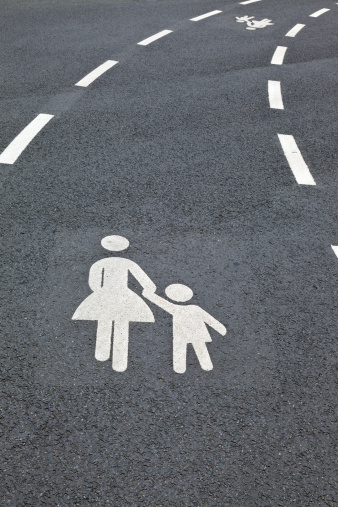 In Louisiana this past June – two pedestrians were killed after being hit by a car while crossing I-12. They were both only 22 years old; they tried to avoid the car, but were hit anyway.

Regardless of speed and agility when a pedestrian goes up against a car – the car will win every time. This event was specifically tragic because they both died. There are many incidents throughout the US every year where pedestrians are injured or die after colliding with a motor vehicle.

PEDSAFE (Pedestrian Safety Guide and Countermeasure Selection System) is an agency dedicated to studying and improving upon pedestrian safety. According to a study they conducted in 2003 there were 4,749 people that died as a result of being hit by a car. These deaths represent 11% of all fatalities from motor vehicle accidents. The largest group of victims are our children, 5 to 9 year old boys are the most likely to be hit and killed.

This is a chilling reminder for parents to be diligent about keeping their children safe while walking or crossing the street. Children tend to run out in the road and not worry about crosswalks – making them a more likely victim. During peak times of day (morning and afternoon rush hours) there are more accidents, so it is critical to have your child walk with an adult during these times. If your child walks home from school, go with them a few times and show them how to walk safely – staying on the sidewalk or shoulder and out of the main roadway.

People over the age of 75 have a less likely chance of recovering after being hit by a vehicle. The elderly are often victims because of their inability to get out of the way quickly when a speeding car or truck is heading toward them. Where a younger, more agile person may escape the crash, an elderly person may be unable to quicken their pace without falling and risking their health even further. It is important for the elderly to understand their health limitations when walking and if possible avoid busy roads during rush hour. Walking on the crosswalk also decreases the risk of being hit.

There are specific things people can do to avoid being hit by a car and practice pedestrian safety.

· Use a crosswalk. Drivers are more likely to look for pedestrians at an intersection with a crosswalk. While it may take an extra minute to walk further down the road – statistically fewer accidents occur at intersections with crosswalks.
· Wear reflective clothing. People walking at night in dark clothing are at greater risk due to a lack of visibility. By wearing a reflective vest or jacket, pedestrians alert drivers of their presence, decreasing their risk of being hit and injured.
· Avoid peak times. More accidents occur during the morning and afternoon rush hour. Pedestrians that can walk either a little earlier or a little later can avoid peak traffic times and reduce their risk of injury.
· Hold hands. Do not let children walk on busy roads or parking lots without an adult. While walking with young children, especially young boys, make sure to hold their hand. Boys 5 – 9 have the greatest risk of being hit and parents can take an active role in protection their children.
· Avoid Highways and Freeways. In many places it is illegal to walk on these busy roadways. Regardless of whether or not the law allows it – walking on a freeway or highway is not safe or smart. Walk on a side-road instead, where the cars are driving at reduced speeds and have a higher likelihood of being able to stop quickly if need be.

Do you have any other tips that might help keep pedestrians safe?