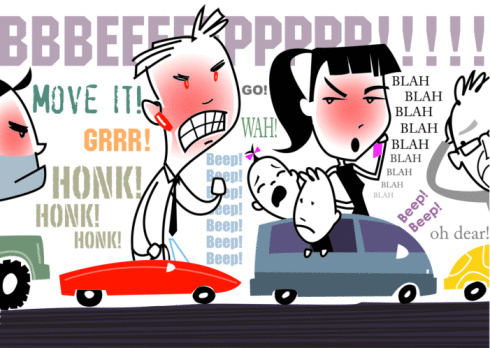 Traffic is backed up on the highway. You’re on your way home from work. It’s been one of those long days, and you’re feeling a little bit stressed about things. You know things will calm down if you can just get through the traffic, get home, and relax a little. Of course, to make that happen, you have to get over three lanes in a relatively short stretch of road. You have your turn signal on; you’re trying to make eye contact with drivers in the lane next to you. You’re hoping someone will show some class and let you over.

It’s not happening. You’re getting annoyed. Heck, you’re starting to get a little angry. Finally, someone gives you the nod. You start to change lanes…and then out of nowhere some jerk cuts you off, almost hitting you in the process. You barely avoided an accident, and now your shot to make your exit, get out of this traffic jam, and get home soon has been ruined. You slam on your horn, and let the obscenities fly!

We’ve all had moments of road rage.

Some are minor, but others go a little further. For a while, road rage was (pardon the wordplay) all the rage. People told stories of violence breaking out on highways between drivers, accidents caused because one driver felt the need to weave through traffic just to yell at someone who had cut him off, and more.

I hate to admit it, but I’ve let the road rage get the better of me on a few occasions. Never to the point of violence or anything like that, but I have made some poor decisions on the road just to make sure that someone who cut me off knew that I was not pleased with what he had done.

If you’ve ever succumbed to road rage, just know that you’re not alone. There are several websites out there (including this one-Driver Story Magazine) that allow people to share their personal stories of road rage. Some, like the road rage section on Boston.com give you the chance to tell your story or to vent your general frustration about the horrible drivers in your city.

Whether you’ve flipped the bird or yelled or taken things a little further, there is a place for you to talk about road rage. However, it’s important to keep in mind that whether you’re the angry one or whether you’re the one who has been on the other side of a road rage incident; it’s never a good idea to let anger or any other emotion for that matter affect your driving. In fact, if someone else’s road rage has caused an accident for you, there are a number of legal options you have.

It’s easy to get angry on the road after a long day or at the start of what you know is going to be a long day. That doesn’t mean you have to let road rage get the better of you. The highway can be a dangerous place even when everyone is calm and paying attention. Don’t make it worse by driving angry.