I can’t tell you how many times I heard a driver say that he wished he could take his dispatcher with him, to teach him what it’s really like. Even I said exactly that many times. I always said that dispatchers would change their tune if they had to ride with a driver for a week or two before they could dispatch. And I still stand by that.

Of course, there are many excellent dispatchers out there and many of them are former drivers, so obviously they don’t all need to be trained by a driver. But, a small percentage of them would get a rude awakening if they got to see what it’s really like out there in the real world, as opposed to what it says on their computer.

I always wanted to write an article about it too:

I always pictured taking some pencil-neck geek with me, as I drive through some metropolitan area during rush hour. I pictured us having an 8AM appointment, it being 7AM, and us only ten miles away, but the traffic causes us to be late anyway.

Then, I would picture us waiting to unload for six hours, and him wishing we had gotten something to eat before we went there. Then, we’d get our next load, which was only fifteen miles away, and they close in one hour. But we need fuel, and traffic is even worse at that time – and he’s even hungrier now, but there’s still no time to stop and eat. By the time we got fuel the place would be closed and we would have to come back tomorrow, but there would be no truck-stop around, and no place to park for the night. Yes, revenge would have been sweet, in my imagination.

Well, the opposite of that is what happened to me. 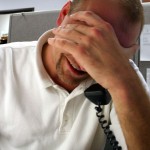 I got a new job with a company that was opening a new terminal. It would be a small operation at first – about five trucks serving one customer – and they wanted me to be the terminal manager. I was excited at the thought of running the whole operation and dispatching only a few drivers. I pictured all the drivers knowing what they had to do, and me going out to breakfast every day. Then, I’d schedule the next day’s runs and go home early. It should have been a piece of cake, right?

I really felt that I deserved this opportunity, too. After busting my butt behind the wheel for over twenty-five years, I figured that I had paid my dues and it was my turn to land the cushy job. And I’d be a good dispatcher – you know, like I always said they should be. I had real-world experience behind the wheel and would be able to relate and communicate with the drivers like nobody else.

Our customer gave us a small office in their building and I spent my first day setting up my computer and my desk. I had a comfy chair and a nice computer with a large flat-screen monitor. It had some games on it, and I thought I’d likely spend several hours a day perfecting my spider-solitaire skills, and maybe keep in touch with some friends on Facebook. How hard could it be with only five drivers, especially when their runs were all-day runs? I’d tell each driver what to do that day and then not hear from them again until the end of the day, right? Boy was I wrong.

On my second day, I found out that I had a truck, too. 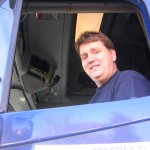 I wasn’t expecting that. It would be my responsibility to pick up the pieces every day and make sure everything got done. I was a little surprised and disappointed, but still optimistic. I spent the rest of the day with my customer, learning what runs we had to cover, and planning who would do what. I found out that it would change from day to day, and they never knew what was being set up for the next day until late in the afternoon. So, I’d have to stay later than everybody else, and make sure to plan the next day’s work before I went home. Bummer.

In the morning, I’d have to get there before everyone else to plan out each of the driver’s runs. After they all got their assignment and took off, then I would have to go out and do my runs. And after a long day’s work behind the wheel like all of the other drivers, I’d get back to the office just in time to find out what we would be doing the next day. I found myself working an average of twelve to fourteen hours a day (the drivers only had to work about eight to ten hours). So much for the notion of this being a piece of cake!

Most days, I’d only get to spend about an hour in the morning and an hour in the evening at my desk – and there would be a lot to do in those hours. Sometimes, during the day, I’d see my desk from time to time, as I walked by, and really wish that I could just sit down for a while and enjoy that nice comfy chair and large flat-screen monitor.

Then the drivers would mess me up!

Then, to complicate matters even further, every once in a while a driver would call in sick or quit. Now, I’d have to do two runs, which was impossible, so I’d have to reschedule some of the work for the next day. It turned out to be a constant battle, having to call customers to reschedule, explaining why we couldn’t make it on time, and then staying later each day to try to catch up, but never actually doing it. It was very frustrating!

And when I told my boss I needed another driver to get all this work done, he got me a Blackberry instead. This way, I could check e-mail and call customers and drivers while I drove! Every day it was easy to get overwhelmed. I had to calm myself down with the realization that I could only do so much in a day, and the rest would simply have to wait until I got around to it.

On top of everything else, every time I saw a driver he would complain about the low pay and the long hours. And all I could think of was – me too! But, I’d do my job and try to pacify them. After only a few weeks, I longed for some of my old jobs, where all I’d have to do was drive. Life was so much simpler then. I like simple.

It’s been about three months now (at the time of this writing) and I’ve learned to expect the unexpected, and even plan on it. But this isn’t for me. I think I’ll buy another truck pretty soon and hook up with an outfit that lets you choose your own runs. Yeah, it doesn’t get any better than that!

I’ll take being a driver over dispatcher any day.

Of course, my job isn’t just dispatcher- it’s terminal manager, routing, scheduling, dispatching, hiring, training, and driving. Maybe if all I had to do was dispatch for eight hours, then go home I’d feel differently. But this experience has taught me that there is just as much aggravation and pressure on the other side of the Qualcomm. I stand corrected.