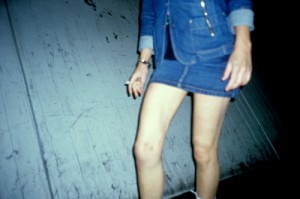 Ah yes, a day in the life of a trucker. Lot lizards won’t let you sleep. Heavy traffic won’t let you drive. And Smokey Bear won’t let you make up for lost time. Don’t get me started on lumpers, dispatchers, money-grubbing truck-stops, and all the other greedy *bastages that corrupt my day. These three are enough trouble. In fact, each one is enough trouble by itself. But hey, trouble is the name of the game, right? … Right? … Hello? …

Lot Lizards are a lot of fun.

Oh, come on, admit it- you like to see them running around with their pony-tails, in their little short-shorts and flip-flops, jumping in truck after truck, meeting the drug dealers in the bushes, talking on the CB, walking toward your truck as you shake your head no. It’s entertainment.

What we don’t like is when they knock on our truck door while we are trying to take a nap.

But when it’s not bedtime, a lot lizard is a pleasant sight. (Well, some are.) It’s not that I would like them to jump in my truck and do some favors for me- no- I’m a married man. What I like is just the thought of them, and what must be going on in those trucks, and watching them do their running around. It’s fun to know what’s going on, and watch it unfold.

Lot lizards sometimes make me think about what it must have been like during the Old West days. A cowboy (trucker) stops in a small town (truck-stop), and is looking for a saloon girl (lot lizard), so he can buy her a drink (some crack), after a hard day riding (trucking) on a dusty trail (asphalt highway). 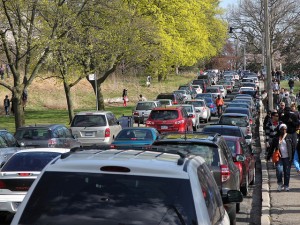 That sounds like a truckers paradise, doesn’t it? Before you punch the computer screen, let me tell you why- to me, it is entertainment. The way I see it, heavy traffic is simply one of those things I can’t change, so I must accept it as a fact of life. And, as long as I’m in it, I look around for the entertainment value it offers.

When traffic is creeping along at a snails-pace, that gives me time to look around. Most of the time I have to keep my eyes on the road, and be ready for anything. But when traffic is barely moving, I get to see the little things going on.

I see women in short skirts in cars next to me. Sometimes they don’t know anyone is looking, so they’ll sit there with their legs slightly open. Now that’s entertainment- see what I mean?

Then, I look around some more and see an aggravated driver. He might be tailgating, lane-dodging, and cussing out all the cars that have him all boxed-in. Whenever I see that, I’m reminded of how short some people’s patience is. And I thank God I’m not one of them.

What’s the twenty on Smokey Bear?

Truckers always love to keep each other posted as to the whereabouts of the Smokey’s. Personally, I never speed (much), so I really don’t need to know where every single cop is. However, it’s entertaining to hear all the truckers talk about it.

I always did enjoy a good CB conversation, and even stopping for coffee to meet. You just never know who you will meet in this line of work. In my 25+ years trucking, I have met former doctors, business owners, ranchers, lawyers, race-car drivers, even a rocket scientist. A lot of people from all walks of life wind up driving a truck. I always like to say, a lot of truckers are known for being a know-it-all, but collectively, they really do know it all.

Everything in life is entertainment:

I have developed the habit of looking at everything in life as entertainment. The things that aggravate some people make me smile. Oh, I can get aggravated, but it’s pretty hard to push me to that point.

If you are the type of driver that gets aggravated easily, let me urge you to try to see the entertainment value in all those stressful situations.

I’ve learned, a long time ago, that life is whatever you make it to be. So, I always accept the things I cannot change, like the Serenity Prayer says, and try to find the entertainment value in everything.

Anyway, your attitude can affect the people around you, so smile. I’ll go first- cheeeeese.

Thanks for stopping by,
Ken Skaggs

*Bastages- From the Johnny Dangerously movie. A kid-friendly cuss-word.