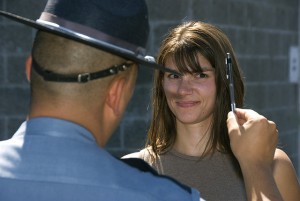 DUI is a very serious charge, and for good reason; nearly a quarter of all fatal accidents can be attributed to an intoxicated driver. Over 200 children are killed in DUI driving accidents with over half of those children being in the car with the person under the influence. You can find out more about the consequences of drunk driving on the NHTSA webpage. The problem is, sometimes people are charged with DUI who aren’t actually guilty of driving under the influence – these charges are usually very hard to fight and can end up costing you thousands of dollars in fees even if you beat the charges. The choices you make from the time you get pulled over to the time you’re charged could make a world of difference, and you may be surprised about what the biggest mistakes are.

Testing for DUI will almost always begin with a field test done by a patrol officer. In almost all states and circumstances, field testing is voluntary – although most officers won’t volunteer that information and will likely pressure the driver into complying for fear of being handcuffed and arrested if they refuse. If a person does end up with a DUI charge after refusing a field sobriety test, they may face additional penalties or receive a more extensive punishment by a judge. The field test is based on your ability to follow instruction, balance, and a few other factors. Results of this test are almost entirely up to the judgment and discretion of the officer. Breathalyzers are often used in the field as well; a Breathalyzer analyzes your BAC based on your breath. Other tests are administered at the police station or medical facility including blood or urine tests – these are done especially if the use of drugs is suspected or if the driver refuses field tests.

While most law enforcement officers have the best of intentions in mind, they are only human and some of the testing is less than accurate when left up to their judgment. The field sobriety tests are only accurate 91% of the time and at least 9 out of every 100 people arrested for DUI based on a field sobriety tests were wrongly accused. Breathalyzer tests can also result in a false arrest. Most commonly, false readings happen because the time a person last drank was not long enough ago to give an accurate reading – even one drink can give a higher BAC than you actually have. Other factors can skew the results of a breathalyzer like using mouthwash, having a drink on an empty stomach and more. Field tests and breathalyzer results are sometimes thrown out in court, but it could be hard to disprove their credibility.

Blood and urine testing are the most accurate and are almost always the strongest evidence in a case against a DUI suspect; this evidence is usually only dismissed if a technical error broke the chain of custody. If you have doubts about the integrity of the tests and are certain of your innocence, it might be in your best interest to go through the hassle of specimen testing in custody instead of trying to fight field testing in court.