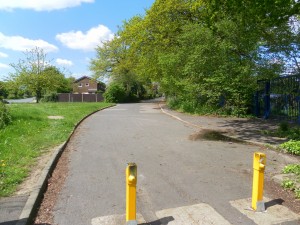 Interestingly enough, a bollard is not what you call a person who fetches the ball during a tennis match (although it would be a great name for him). A bollard is actually a plastic or metal post used for the purpose of securing restricted areas from vehicles. It’s a form of traffic control and safeguarding structures; but most importantly, bollards protect pedestrians. The posts can either be installed directly into pavement or they can be securely anchored to the ground with bolts making them collapsible and removable. Bollards have the capability to mechanically rise and retract into the ground allowing private access to, say, a bus but not the car behind it. As we all know, people can be very irresponsible when it comes to driving.

Let’s put it this way — what do these words have in common: screech, bang, smash, crash, BOOM? They are the sounds of a car crashing. In the case of a car hitting a bollard, the bollard always wins. Always. These are the stories of bollard survival.

According to TrafficGuard Direct, in April a drunk driver crashed his truck into a bollard outside of a Nebraska Air Force Base in the dark of the night. Thankfully for the guards and the residents of the military base, the bollard was placed there for the purpose of keeping unwanted vehicles off the premises. It worked. The front portion of the truck was smashed and destroyed (the driver was alright). The report indicates that more bollards were ordered for further protection.

There are countless images and videos of cars crashing hard into bollards in locations across the world. And it’s usually the same scenario: a driver gets impatient and tries to get into a restricted location. Thinking they are clever, they try to out-speed a rising pole and they end up with a severely damaged undercarriage. What happens is the retractable bollard descends into the ground to allow an authorized vehicle through. The guilty car in question then tries to speed through but the bollard is relentless and punishes the driver for their bad behavior.

A gently scratched bollard says to its bollard buddy, “You should see the other guy.”

I don’t think words can describe it as good as this video. Driving into a bollard can break your vehicle, whether it be car, truck or even a semi-truck. You can severely damage your entire front end while ripping up the underside of your vehicle including the chassis rails, skirts, supports and engine parts. While bollards can save a life, they can also damage one.

The very purpose of a bollard is vehicle deflection. They are installed into areas such as sporting area exteriors, malls, paths, toll booths, bike lanes, store fronts, fire access lanes and playgrounds so drivers can’t get to these areas on accident or intentionally. Here’s a case where the bollard should get a “hero” award for saving a little girl’s life as she walks beside a building protected by a row of bollards. A car reverses very quickly into the poles, the back end climbs them (almost making the car vertical) and, if not for the bollards, this little girl wouldn’t be alive to tell the story.

————BIO————
Melissa Baker: Melissa is a whiz with social media and is constantly connected to the big four (Twitter, Facebook, Google & Pinterest). She has been an extra in a dozen films and lives in the L.A. area.