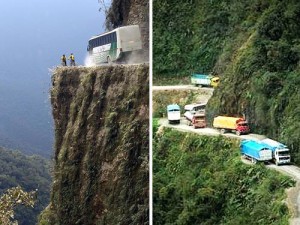 No matter one’s age, race, gender, or occupation, we all have one thing in common—the desire to participate in enjoyable hobbies during our free time. While there are a number of hobbies enjoyed by individuals around the world, travel is one of the most common. In many cases, tourists are required to drive in the countries in which they are traveling, to get to their desired destinations. Identifying the parts of the world which are most dangerous for motorists can be useful when it comes to planning an upcoming vacation.

China is considered by most experts to be a leader when it comes to driving danger. In fact, the Sichuan-Tibet Highway, which connects Chengu and Tibet is largely recognized as one of the most hazardous roads in the world. This road features frequent mudslides and rock avalanches, likely contributing to the 7,500 deaths for every 100,000 drivers that occur each year. Frequent rains and high rates of drunk driving also are a factor in the dangers associated with driving in China.

Italy is also a relatively dangerous country when it comes to driving. As with China, the risks associated with driving in Italy are somewhat associated with the landscape—for example, the Stelvio Pass in the eastern Alps reaches a height of 9088 feet. Limited concrete barriers, hairpin turns, and abundant motorists make this road especially dangerous. Fast traffic and high population densities in Italian cities can also contribute to dangerous road conditions when driving in this scenic part of the world.

Chile was once considered to be quite dangerous and rarely visited by tourists—however, in the past several years, travel to this part of the world has increased by leaps and bounds. Unfortunately, roads in Chile are often covered by snow year round, and semi-trucks, freight haulers, and other large vehicles block the roads regularly. In Chilean cities, dirt or gravel roads are still abundant and travel signs are conspicuously absent. Trying to get a reliable vehicle here can also prove to be quite challenging.

Without a doubt, the United States is one of the most dangerous countries in which to drive. In fact some research suggests that there are as many as 1,000 car accidents in the United States each day! The danger with driving in the US is most commonly associated with over populated roads and poor highway conditions. Driving while intoxicated, texting, and distracted driving makes the United States a dangerous place for motorists.

India wraps up the list of the most dangerous countries in which to drive. As with many of the other places described above, poorly maintained roads are a major factor behind these risks. In recent years, drug cartels have begun to relocate to India, making travel by oneself a dangerous undertaking. Those who do visit this country may fare better by traveling with a tourist company or another similar large group to ensure safety.

About the Author:
Andrew Miller is a passionate member of the End Ecocide movement, an avid blogger, traveling enthusiast and co-founder of the tech startup scanandban.com.