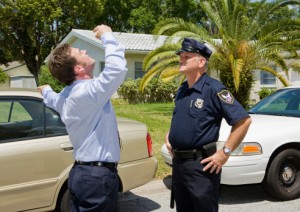 That night, you were certain you would be okay to drive home. You even almost made it, but then you saw the blue and red lights of the police car in your rear-view mirror. The officer asked you to walk a straight line and recite the alphabet. You are a little bit fuzzy about what happened next, but you were handcuffed and placed in the back of the police cruiser.

DUI (driving under the influence) is also known as DWI (driving while intoxicated). In the United States, more than 100 million DUI incidents occur each year. This epidemic of bad behavior leads to an average of one death every 51 minutes; the annual cost associated with DUI is more than $37 billion.

In all 50 states, a blood alcohol content of 0.08% or greater is considered intoxicated. If you are caught driving in this condition, you will most likely be convicted of DUI.

A DUI conviction can lead to a large number of difficulties beyond the arrest itself. One of the major costs will likely be your auto insurance. If you are convicted of DUI, driving insurance rates could easily double.

In 42 states, your first DUI offense will result in your driver’s license being suspended immediately. Simply having an open alcohol container in your car is illegal in 30 states. Twenty-six states also have much stricter laws for repeat DUI offenders. One of the biggest problems you may face if you are arrested for DUI is the confiscation of your car or truck. In 30 states, your vehicle will be impounded if you are arrested while driving impaired.

If your car or truck is impounded, you will probably be able to get it back, but it will most likely be a time-consuming, difficult and expensive process. At the minimum, you will have to pay all costs associated with towing, storage, taxes and fees. If you are unable to pay these costs within a reasonable time-frame, typically 30 to 60 days, your vehicle may be put up for auction. Depending on the exact circumstances, you may even be required to forfeit your vehicle in some states.

The best strategy to avoid a DUI conviction is to simply avoid situations that might lead to driving intoxicated. If you are out drinking with friends, always have a designated driver. If you even suspect that you may have had too much to drink, do not take the chance of driving. The cost and difficulty of calling a taxi are insignificant compared to the hassle of a DUI conviction. If you have been convicted of DUI already, be assured that you can get through it. If you believe you have been wrongly convicted, you should consult an experienced attorney. In either case, getting through it will not be easy, and it may be expensive.