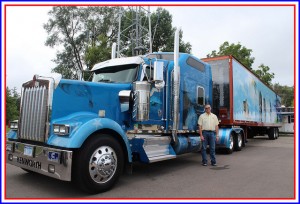 I would even go so far as to say they speak their own language. You can usually spot them by the rubber chicken sticking out of their back door, looking as though the door closed on it, while trying to escape.

Chicken haulers are much easier to spot at night.

They pass you by like the sun, a yellow, hot ball of light, glowing in all directions. If it weren’t for the fact that they are usually going eighty miles per hour, you’d be blinded for sure. Thankfully, they pass quickly and are soon out of sight. But, just in case you blink and miss one, don’t worry, just turn your CB radio on. They are sure to be talking, non-stop, especially if there are two or more of them traveling together. They like to do that, travel together, as one, an American road-train. In Australia, they hook five trailers up to a tractor, but here in the good ‘ol USA, they travel so closely together, that they are as one long vehicle.

They always have super-duper CB radios too. You’ll hear them up to twenty miles away. They’ll be talking about the run they used to do and the truck they used to drive, which was even better than this one. They pause long enough for some one to answer “uh-huh” and then they continue on, about how well they drive, while they speed through the mountains.

They’ll talk about the good old days, back when they used to make five dollars a mile and their truck went over one hundred miles per hour. They have plenty of stories for willing (and unwilling) ears. They’ve all seen a moose before, in the road of course, trying to attack their truck. Most of them own ranches, with horses and cattle, and do a little NASCAR racing on the side.

Recently divorced, the chicken hauler is always looking for love in all the wrong places. Namely, the CB radio. Whenever he hears anything resembling a female voice, he asks whose “sweet voice” that was- every time, without fail. You could even lip-sync it along with him, it’s so expected. If she is going his way, he will bravely lead the way through the night, risking getting a speeding ticket, in order to impress her. He’ll tell her he knows these roads like the back of his hand, as he drives beyond what he can see with his headlights and gallantly explains just exactly how cool he is. Then, he’ll offer to buy her a coffee and she’ll sneak off at the next exit when he isn’t looking and disappear.

I mean, really love them, like a wife. They’ll spend all of their money on them, buy them gifts, like, chrome and lights, to decorate themselves with, like a girl wearing jewelry. The truck is the girl and he’s the sugar daddy. He has a name for her too, usually Betsy, or Betty-Lou. He keeps her clean and shiny, even underneath, spotless.

That bandana sticking out of his pocket? It’s a dust cloth. He’s always wiping it off. He parks at the far end of the parking lot. He doesn’t mind the long walk back to the truck, he gets to look at it longer that way.

Chicken haulers are usually the first one to stop and help you, when you need a hand.

One actually gave me a headlight one night. He wouldn’t even take my money. I offered him ten bucks but he refused. It left me feeling like I owed the next broken-down trucker I find a helping hand. He held a flashlight for me while I changed it and told me to pay him back by helping the next one I find, who needs help, and I did.

I think it was the next day, I gave a trucker a jump-start. More than once, I’ve stopped to lend tools to truckers asking for something specific, that I happened to have had. I’ve helped others many times and I have been helped many times too.

Hug a chicken hauler today. Wish them a Merry Christmas and buy them a cup of coffee. Then get the heck out of there.