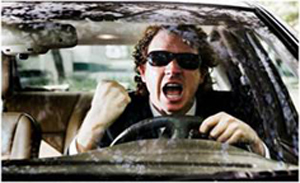 I came across this lengthy study on aggressive driving, so I thought I would put some numbers up here to show everyone, so we can all learn something.

I have a better name for it. Reckless driving. Wait a minute. Reck-less? Now there’s another user-friendly term. It should be called wreck-more or wreck-full driving. And why isn’t there a W in reckless anyway?

What is aggressive driving?

Did you ever see a driver tailgate another driver so closely, that the driver in front gets scared and moves out of the way? That’s aggressive driving. Or, as I like to call it, reckless driving. Or how about this one: A driver who tailgates, just so nobody can cut in front of him. That’s aggressive driving too. And what about a driver who keeps quickly switching lanes? Very aggressive. It’s usually the same person doing all of the above.

It might be an otherwise safe driver who happens to be on his way to the hospital. Or it might be a person who always drives that way. Whatever the case, when you see an aggressive driver, give them room because they are coming anyway.

The one who loses their temper is the one at fault in any road rage incident.

There seems to be a lot of talk about aggressive driving these days. But it doesn’t really get to the point. All they seem to say is “everybody does it.” TV and radio ads, newspapers and even comedians are talking about it. Everybody just laughs and says, “yeah, I do it too.” As if it was normal behavior to almost kill somebody.

Well, I am here to say that everybody doesn’t drive that way. And I don’t think it’s funny when someone tailgates a slow driver in the left lane. Yes, he should be in the right lane, but is that a good reason to kill him? I know you think he wouldn’t dare step on his brakes right at that moment, but what if he had to? What if he had a tire blowout right then? You never know. It can and does happen.

Actually, there are a few things happening that may help. The National Highway Traffic Safety Administration recently completed a nationwide survey about speeding and other unsafe driving actions.

Here are some of the results of that aggressive driver study:

The study also revealed that men are more likely than women to engage in unsafe driving behaviors, and that young drivers commit more unsafe driving actions than older drivers do (so much for the old people shouldn’t be driving theory). See teens vs seniors driver study for more on that.

The Arizona Highway Patrol and the Governors Safety Office teamed together three years ago to start an enforcement effort targeted at aggressive drivers. Unmarked patrol cars are handing out reckless driving tickets to drivers for speeding twenty miles over the speed limit, erratic lane changing and tailgating. The Highway Patrol reports getting fewer calls for aggressive drivers now, so it must be working.

In 1997, only two states, Maryland and Virginia, introduced legislation to create specific penalties for aggressive driving offenses. In 1998, nine states introduced a total of twenty-six bills. And in 1999, fifteen states introduced thirty-one bills. This is very encouraging to me. It seems to be getting better each year. When we get some newer numbers, I’ll post them here.

There is a fine line between making good time and aggressive driving.

We all feel the need to hurry once in a while, but being aggressive with a vehicle is not the same thing as being in a hurry. When you’re in a hurry, all you can really do is not waste any more time. You cannot make up time. Too often I hear drivers say, “I have to make some time”. As if, by defying the laws of nature and man, they can somehow roll back the clock to create a minute or two that was not there. You might be able to squeeze out one more mile per hour by taking all kinds of risks, but it’s not worth it. One wrong move could mean a ticket, accident or road rage incident. And now you’ll really be late.

Please be careful out there. You only live once.