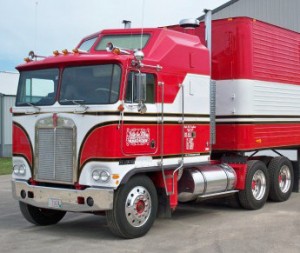 How many times have you heard about the good old days? Back when truckers used to help each other? And respect each other? Back when a trucker was someone who could be trusted? In the good old days, if you asked a fellow-driver for help, he would surely give it. And never, would they cuss each other out on the CB. I hear this sort of thing almost every day.

Sometimes, when someone asks for directions these days, the answer they get is, “Go buy a map” or something worse. Supposedly, that sort of thing never happened in the good old days. There was a different breed of driver back then. He was a kind, generous, helpful, intelligent, strong, safe driving, never in a hurry, family man, superhero.

Many drivers, the old-timers, really miss the good old days.

They often say that they used to make the same amount of money that they make today, back then. I know a milk hauler who has been at it since the sixties. He makes about six hundred dollars a week and drives a tractor-trailer. In the sixties, he says he made six hundred dollars a week too and drove a small step-van. (Remember the old milk trucks?) He says those were the good old days. He could pay his mortgage and all of his bills at once, on any given week. But not today. Today, it takes almost all of his money to pay those same bills.

One day, I was driving down a two-lane road in the middle of nowhere. I heard a voice on the CB asking for a lug-wrench. The voice got louder as I got closer and then I saw him. An old man driving an old truck. He was stuck half-way in the roadway, because there was no shoulder to pull off onto. I had a lug-wrench and it looked like I was his only hope, so I stopped. He said that at least ten trucks drove past him, without saying a word. I helped him change his flat tire, while he told me all about the good old days. He said that back then, anytime someone got a flat tire, the very first truck passing would always stop and help.

There are a lot of fairy tales about those days and the stories get stretched every time they are told. Many of these stories have become urban legends (or should I say rural legends). The old bull-wagon drivers are the best, or worst, depending on how you look at it. They often tell me of the days when they didn’t have to stop at weigh stations. They say that they used to fly past the weigh stations, going over one hundred miles per hour and the cops never came after them.

There’s one story going around about a young police officer who decided to perform a D.O.T. inspection on an old bull-wagon. He slid under the trailer, to check for problems and slid out, after finding nothing wrong, covered with bull-crap. As do many of the listeners of this story.

There’s another rural legend going around, about seeing a moose, on a quiet two-lane road, somewhere up in Canada. The end result is that, if you blow an air-horn at a moose, he will bash his antlers into your truck about ten times and you will leave the scene, in need of about five thousand dollars worth of body work.

Just last month, I was having coffee at a truck stop, talking to two old-timers, who didn’t miss the old days one bit. They laughed, remembering the bouncy old trucks that had spring suspensions and no air-seats. According to them, life was much more difficult for truckers, back then. Nobody had air conditioning. The Interstate Highway System wasn’t half of what it is today and truckers always wound up going down two-lane roads that led through countless towns and hills. And many times, there would be a low overpass somewhere you’d least expect it and you’d have to drive fifty miles away, to get around it, only to find another one.

They told me that truckers really worked hard in the good old days.

There was no such thing as a clean job. Not like today, when drivers get to drive around in air-conditioned condos and never have to unload anything. They sit there and clean their fingernails while lumpers unload their truck. And then they complain about it, because it takes too long.

I am sure there are a lot of things different today than the old days. Some better and some worse. That’s progress, some would say. As for me, my experience only takes me back to the mid-eighties. I remember being blown away by the new Kenworths around 1984, when they came out with the Aerodyne. That was the first time I ever saw a big sleeper that was really mass produced. That was also the first time I ever heard of having a TV and a microwave in a truck.

Today, almost all road trucks come with even bigger sleepers and most drivers wouldn’t leave home without their TV and microwave. Many drivers these days wouldn’t even drive some of those old trucks, simply because the sleeper is too small. Drivers today, myself included, are being spoiled with all kinds of comfort features and rightfully so. After all, we do work hard, even if it is just driving. It’s not easy sitting at a steering wheel for ten-plus hours a day. At least you can relax in comfort when you take a break.

As far as comparing today with the days when I started, I would say that I am much better off now. I think inflation has outpaced drivers pay, but overall we are still better off now. I would rather drive a nice truck for fifteen hours, than drive an old junk for ten. Those old trucks beat you up. At the end of the day, you go home tired and dirty, even if all you did was drive.