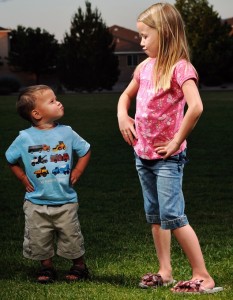 I just love that phrase- Attitude is aptitude. It is so true. I thought I made it up, but I recently found it on another website, so apparently I am not alone in this belief. I am totally convinced that a pleasant, friendly, helpful attitude is not only a good sign of toughness, but also a sign of genius.

A good attitude is a sign of toughness, because nice people can take more crap. My father always said that a person’s toughness is measured by how much they can take, not how much they can dish out. Many people can throw a hard punch, but how many can take that punch? How many can take that punch and still smile? You have to be pretty tough to do that. It reminds me of Hoss, from the old TV show Bonanza. Whenever someone punched him, he would just rub his jaw and ask, “What was that for?” A lesser man would automatically punch back.

A good attitude is a sign of genius too. Most people know that a smile can get you farther than a frown. A smile in the face of a difficult task somehow makes it seem less difficult. Successful salespeople always say that they “eat rejection for breakfast”. Everyday they face rejection. Doors get slammed in their face and they somehow still find a smile for the next person they meet. That’s not an easy thing to do, which brings us back to toughness.

Some people would say that a salesperson’s smile is a fake smile. And maybe it is. But I would still rather face a fake smile than a real frown. Smiles are contagious. A fake smile and a little humor can bring a real smile out of another person and in turn, a real smile from the person who originally gave the fake one. Sometimes you have to fake it to make it real. Even courage can begin as fake. If you fake courage and go through the motions, in the end you can look back and say that you were indeed courageous at that moment.

A good attitude can also help you live longer. Just look at George Burns (100), Bob Hope (99) and Milton Berle (91). Three famous comedians off the top of my head, who lived long, happy lives. Coincidence? I don’t think so. I think this is what they meant when they said that nice guys finish last. Nice people are given more opportunities too, simply because they are easy to get along with. They are more fun to hang around with. Who wants to hang around with someone who is always complaining?

Have you ever had to work with someone who was always complaining? I sure have. Some people are just never happy. You give them an inch and then they want to be the “ruler” (get it?). They usually complain about how stupid everyone else is and they don’t even know that they are making themselves look weak and foolish in the process (uh-oh, now I’m doing it).

A bad attitude can give you an ulcer, a heart attack or stroke, and can even get you into a fight, which of course can lead to even more injury to yourself. It’s a matter of survival. People with a bad attitude always hurt themselves. It’s like a terrible burden that you have to carry. Like hate. People who carry hate around always hurt themselves. It makes you think evil thoughts of revenge, which of course can get you in trouble with the law too.

With some companies, the so-called squeaky wheel gets the grease. Drivers who complain sometimes get what they want by simply complaining about it. And all the nice guys who put up with the junk get nothing. This isn’t fair, but it happens. This can also be a character building moment, for a nice guy, who may finish last in this instance, so to speak. I have seen on several occasions a new driver come in and complain about his truck, for example, and right away they give him a better truck than all of the nice, quiet guys get. This sort of practice can make an otherwise nice guy start to complain.

But I would like to remind them of this: when an opportunity for advancement opens, guess who will get it? The nice, quiet, genius of course. Everybody likes him. Nobody wants that other guy, who complains all the time, to be hanging around the office and/or dealing with customers. The nice guy always gets the “gravy” run too, because he deserves it.

Driving a truck these days is a tough job. There is so much traffic and construction right now and everybody’s patience is being tested. Everywhere you look there is a stupid driver messing it up for everyone else. No matter how well you plan your merge, so as not to cause a bottleneck, someone else will squeeze in and ruin it. Tempers are flaring between drivers. Truckers are almost getting into fights with each other. I know, as much as you’d love to, you can’t cuss out a four-wheeler, because he doesn’t have a CB. But a truck does. And drivers are cussing each other out on it, simply because they can, and that puts a strain on all of our ears.

So, my point is, take it easy out there. It takes a tough genius to do what you do. Patience is a skill, just like backing and steering is. Dig deep, it’s there. Fake it for a while and soon it will be real. A trucker without patience is like a mechanic without a screwdriver. Take a look in your toolbox, I know there’s some patience in there somewhere. It’s probably hiding, so you’ll have to look hard to find it. And when you hear a driver on the CB starting trouble or losing his patience, tell him that. And tell him that attitude is aptitude. Or change the subject with something funny. Thanks for listening. If you want to read more philosophical ramblings, from a trucker’s perspective, check out bigcitydriver.com.