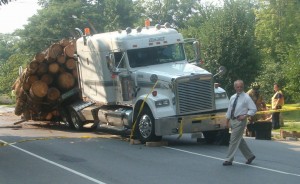 I’m sure most of you know what a preventable accident is, but, how many accidents could have been prevented if not for certain company policies?

That’s right, trucking companies dig deep for any reason they can find to pin the blame of an accident on the driver (and everything else). Whether it was the driver’s fault or not, they will do their hardest to find some way to say that it was at least partially the driver’s fault.

Well, this time, let’s see how they like it. I firmly believe that many accidents could be avoided if trucking companies would put safety first, for real, instead of the bottom line. Too many companies cut down on safety features and develop policies which put safety second to the almighty dollar.

For example, for years many trucks have come equipped with all kinds of safety features, available as options, on new equipment. There are electric mirrors, heated mirrors, power windows, fog lights and fender mirrors, just to name a few. Many companies don’t get these options for the sake of the bottom line. But any driver can tell you that each and every one of these items have prevented many accidents.

While it may be true that it is still the driver’s responsibility to get out and look, if his mirrors are frozen, or if he doesn’t have electric mirrors, or whatever, it is also true that any accident caused by not having those features could have been prevented by simply having them.
There are many things that can prevent an accident, whether it’s something the driver could have done or a safety feature that the truck should have had.

Of course, this argument won’t hold up in any courtroom, but you can’t deny the fact that there is such a thing as a “company preventable” accident. After all, if you hit something while trying to back-up with frozen mirrors, it could have been prevented by simply having heated mirrors (or by getting out and looking).

And slow trucks, don’t even get me started on these. Here’s a little news flash for all of you companies out there who set your trucks at 55-60 mph: that simply is not fast enough, unless it never leaves a 55 mph state – period! A truck should be able to do the speed limit, or at least 70 mph, if it is going to travel all 48 states.

The first thing we learned in Driver’s Education was that the safest speed to travel is with the flow of traffic (try telling that to some of the states which have different speed limits for cars and trucks, but that’s another story).

The simple fact is, if a 63 mph truck gets rear-ended on the Oklahoma Turnpike (where the speed limit is 75 mph), that is a “company preventable” accident. Yeah, I know, it won’t legally be their (the company’s) fault, it will be the fault of the one who did the rear-ending, but you can’t deny the fact that it probably could have been prevented by simply allowing the driver to do the speed limit. But what do they care? They saved some money on fuel. Once again, money is more important than safety (and fuel).

In all fairness, you must realize that without profit, there is no company. What good is a decked-out truck with all the extras when it gets repossessed? Try to understand that everybody has to draw the line somewhere. If companies don’t limit their spending, they won’t be in business very long. It’s simply a matter of survival. Although, I must admit, some companies are just ridiculous where they draw that line.
Most of the big companies have all of their policies etched in stone.

There is no reasoning with many of them. Of course, that’s a big reason why they can’t seem to keep drivers, but, again, that’s another story. Smaller companies are generally more responsive to driver’s demands, but sometimes you can get a big company to bend the rules by going up the chain-of-command. If you find the “right” person and explain your problem and solution using a common sense approach, they’ll sometimes listen and agree.

Many drivers etch their policies in stone too. For example, you can simply say that you would never work for a company with slow trucks, or one that doesn’t have those safety features, or whatever. But you, being an individual with common sense, may be willing to give up one demand in return for another. If you are willing to give a little, sometimes companies will give too.

Of course, you need to be an excellent driver for them to even think about bending the rules. Don’t expect any special treatment if you are a lousy driver with a bad attitude.

Generally speaking, you almost always have to give up something to get something in return. You have to earn your paycheck one way or another. And companies have to make a profit one way or another, but at what expense? If they cut corners on safety equipment and have slow trucks, they will most likely lose drivers, which, in the end, will cost them more money. Then, they will lower their hiring standards, which will result in even more accidents and higher insurance premiums.

Then there’s dock time. Too often, companies who pay by the mile don’t mind hauling freight that requires drivers to spend hours loading and unloading. After all, it doesn’t cost them anything if they don’t pay waiting time. Or does it? More often than not, a driver will lie about loading time on his log just to leave more time for driving. This way, he can still make a decent paycheck. But now you have a tired driver out there, running the risk of having an accident and costing the company even more money (not to mention risking other driver’s lives). So again, hauling loads that require long hours of loading or unloading can cause “company preventable” accidents as well.

The laws are such that it will be the driver’s fault, legally, if he has an accident while cheating on his log or failing to get out and look. But there is one thing you can do. You can choose to work for someone else. It’s up to you which shortcuts you are willing to take. Please be careful out there and never drive an unsafe truck or bend the safety rules because “the company” told you to. In the end, a “company preventable” will still be the driver’s fault. For more “insights” into trucking, be sure to browse Big City Driver.