I recently wrote a piece on average truck driver pay for OTR drivers, and now I got slammed with emails from drivers who want to know the average hourly pay. So here goes.

I’ve always given my opinion about truck driver pay based on my personal experience. However, when I found this huge study by the Bureau of Labor Statistics (BLS) it confirmed a few things I knew, and even shed some light on a few things I was wrong about. But the good news is, we can all learn a lot by looking at some of these numbers. It shows average pay in certain areas, as well as certain industries within the tucking industry. Finding a good-paying local driver job can be accomplished with a little help from Uncle Sam. Let’s take a look at the numbers, and see how your experience lines up with what the US government says.

I know a lot of drivers reading this are thinking, every truck driver I know works a lot more than 40-hours a week. And that is true for OTR drivers. But local truckers get the luxury of working only 40-hours a week on average.

This average hourly pay includes everyone, from every area, and every industry within the whole trucking industry, all across the fruited plain. As you will see, it depends on where you work, as well as what you haul.

This is the percentile breakdown (the percentage of drivers at each pay level.)

Considering those numbers above, we can conclude that 10% of the local truckers are making more than $28.66 an hour. 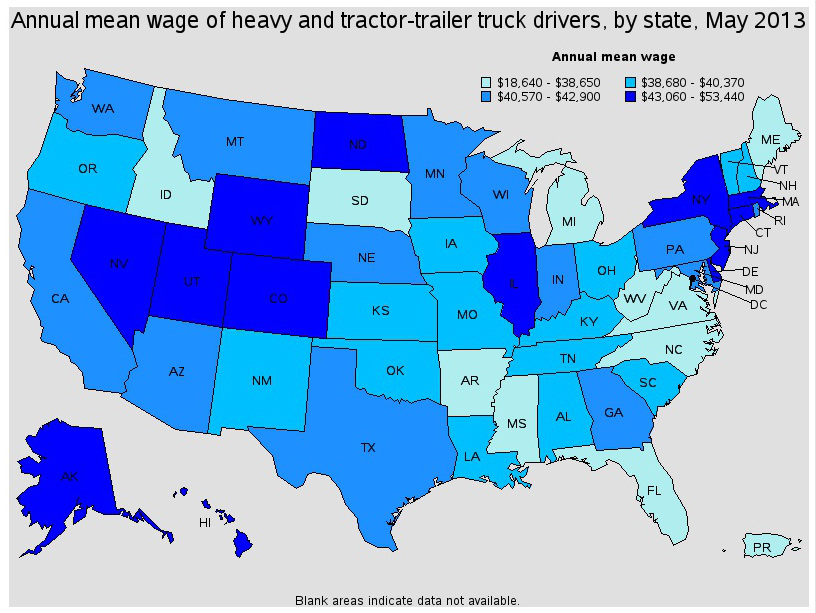 Which Trucking Industries Pay the Most Per Hour?

Having lived and worked in Chicago, San Francisco, Los Angeles, rural Wisconsin and Indiana, my experience has taught me that the best paying jobs are the union jobs, and construction. From asphalt to general freight, the unions are mostly on the top of the list of good paying local driver work. However, there are exceptions. Like oil for one.

This is the way they describe the top paying industries within trucking, and their respective average hourly pay:

I’ll add some personal experience to this list. Most asphalt companies pay their semi-dump drivers around $25 an hour in the Midwest. Of course, the unions pay more, about $35 an hour.

Grocery drivers are mostly union and pay well too. But it varies by area. For example, a union grocery driver in Chicago makes about $32 an hour. And the same company in NW Indiana pays $16 an hour. Same trucks, same company, same metropolitan area they deliver to. The only difference is which state they work out of.

Which Trucking Industries Hire the Most Drivers?

I wasn’t too surprised to learn that General Freight is the top industry as far as numbers of drivers they hire. These are the local versions of OTR companies. And they offer some of the lowest paying local driver jobs you can find. All the major OTR companies (like Schneider, JB Hunt, etc) pay their local drivers peanuts compared to local companies that only do local.

If you are an OTR driver looking to get off the road and be home every night, find a new job, don’t stay with an OTR general freight hauler and work locally for them.

These are the industries that hire the most, and the number of drivers they hire:

I would like to add the fact that petroleum haulers are doing very well in certain areas. The study shows an average pay for petroleum haulers at $19.93 per hour. But I happen to know that in Odessa, TX and in North Dakota they pay almost twice that in some cases.

As with any line of work, finding the best job takes some knowledge. The more you know, the better you will do. That’s why this study is so important for drivers. It will show you exactly how your job measures up to the average job. If you are just starting out with your CDL practice Test this study will give you an idea what to expect. Read on.

As I’ve said before, your pay depends on where you live and work as much as what you haul. This picture shows the states that pay the most and the least. Of course, each city breaks the rules, as does each segment of the trucking industry. These are only averages. Take a look and see how your state measures up to the average pay across the country. 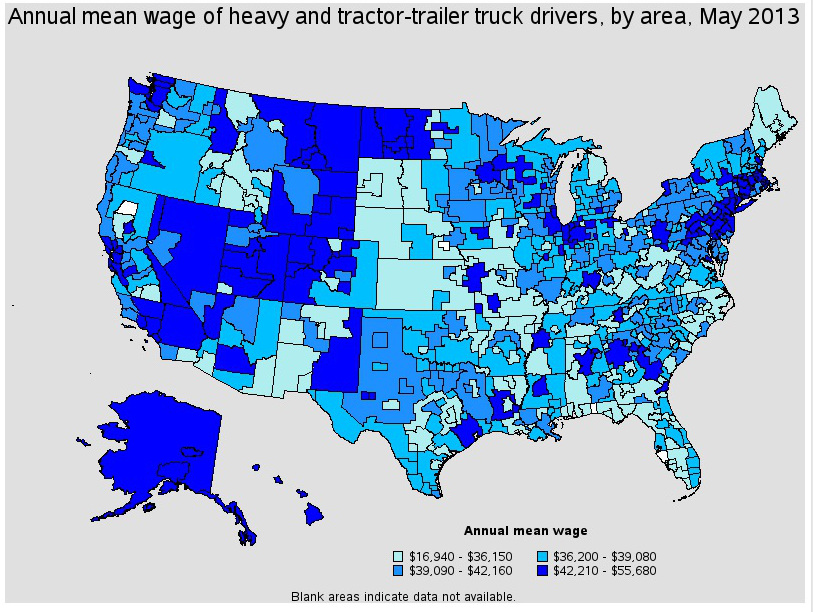 My personal experience says Chicago rocks. Of all the places I’ve lived and worked, no area compares to Chicago and the surrounding suburbs. Most of the trucking companies pay well, and are always looking for drivers However, it didn’t make the BLS study top-ten. I’m sure it’s not too far down though. I see it is dark blue on this map, so it’s a good one.

These are the top ten cities for driver pay and their average pay:

What is new to me though, is all the non-city areas that earned a dark blue status. Take a look at the barren areas like North Dakota, Montana, Nevada, Utah, Colorado, etc. Some country areas pay as well as the cities in some areas.

Here are the top five non-metropolitan areas hat pay the most:

We can all learn a lot from these images and stats. We see the tends by area and industry. So, if you plan on having a career as a truck driver, you might want to consider moving.

At least you can know what you are up against in your area.

If you are just getting started in trucking, or need a refresher course, check out this CDL Practice Test site.

It takes a little luck, timing and skill to land that keeper of a job. You are now armed with some knowledge. So, good luck out there.