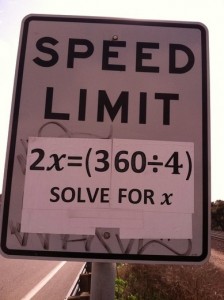 Fifteen years ago, when I first started Big City Driver, I had this theory that space could combat traffic jams. I figured if we all drove with enough space in front of our vehicles we could make traffic jams a thing of the past. I was so excited by this revelation, I wrote a little booklet and sent it to Jesse White Secretary of State of Illinois, and every trucking magazine I could find online. (There were only 21 at that time in 2000.)

It was that little booklet that inspired me to start this website back then, and it helped me land a columnist job at Ten Four Magazine. I continued to write regularly for them for the next ten years (2000-2010). In the beginning, when I first started trying to explain that to drivers, I got a lot of negative feedback.

So, when I found this experiment by Bill Beaty I got excited and wrote a column about it. These days, it is settled science. But guys like Bill Beaty and me were the pioneers with this theory. I’ll post that article below so you can see for yourself just how ahead of the times we were back in 2000.

I knew I was right! And now I have scientific proof for all of my skeptics. I have always said that tailgating causes traffic jams. People have sometimes argued that they feel they have to “keep up” with traffic to prevent traffic jams. And they get frustrated when the car in front of them doesn’t “keep up”. If you really believe that trying to keep up with, or worse, trying to go faster than the flow of traffic is alright, then this one is for you. The following experiment was conducted in 1998 by electronics engineer and amateur scientist Bill Beaty:

Once upon a time, years ago, I was driving through a number of “traffic waves” on I-520 at rush hour in Seattle. I decided to try something. On a day when I started hitting the usual “waves” of stopped traffic, I decided to drive slower. Rather than repeatedly rushing ahead with everyone else, only to come to a halt, I decided to try to drive at the average speed of traffic. I let a huge gap open up ahead of me. And timed things so that I was arriving at the next “stop wave” just as the last red brake lights were turning off ahead of me. It felt weird having that huge space ahead of me, but I knew that I was driving no slower than anyone else. Sometimes I hit it just right and never had to touch the brakes at all, but sometimes I was too fast or too slow. There were many waves that evening and this gave me many opportunities to improve my skill as I went along. I kept this up for about a half hour while I was approaching the city. Finally, I glanced in my rear view mirror and saw an interesting sight.

It was dusk, the headlights were on and I was going down a long hill toward the bridges. I had a view of miles of highway behind me. In the other lane, I could see five traffic waves. But, in the lane behind me, for miles, TOTALLY UNIFORM DISTRIBUTION. I hadn’t realized it, but by driving at the average speed, my car had been “eating” traffic waves. Everyone ahead of me was caught in the stop and go cycle, while everyone behind was forced to go at a nice smooth 35 mph or so. My single tiny car had erased miles and miles of stop and go traffic. Just one single “lubricant atom” had a profound affect on the turbulent particle flow within the “tube”.

It’s always a good idea to drive without changing speed or competing with other drivers for bits of headway. But, I’d always assumed that the reasons were philosophical rather than practical (i.e. try to be a calm, nice person.) But my experiment proved differently. A single solitary driver, if they stop competing and instead adopt some new driving habits, can actually wipe away some of the frustrating traffic patterns on a highway. That “nice” noncompetitive driver can erase traffic waves. I suspect that the opposite is also true; normal competitive behavior CREATES the traffic waves.

On my evening commute on I-5 southbound from Everett, there is always a traffic jam at one of the Lynwood off ramps. Close packed cars must crawl along at 2 mph for a very long time. Therefore, I approached the jam in the right lane and started to let a really huge space open up ahead of me. By the time I hit the jam, there was about 1000 feet of empty road ahead of me. Sure enough, my big empty space stopped traffic from feeding it from behind, while the front of the jam kept dissolving as usual. By the time I had arrived, the jam was about half the size it had been. Amazing. This wasn’t a little traffic wave, yet a single car was able to take a huge bite out of it.

Obviously, my actions did more than reduce the size of the jam. In order to create the empty space, I was temporarily driving about 10 mph below the speed of the heavy traffic. I did this for several minutes and therefore I was causing a slight slowdown behind me. After I arrived at the jam, the jam was smaller. When all was said and done, part of the jam had been removed. However, it changed into a mild slowdown and it was spread backwards upstream over several miles of traffic. Rather than driving at 50mph, only to crawl along through a traffic jam for a few minutes, everybody was now driving at 40mph for a few minutes before the jam, but then having a much smaller traffic jam to endure. The nasty frustrating 2 mph part of the traffic jam was changed into a large fuzzy area of reduced speed. If I had done it correctly, I would have erased the whole jam, transforming it into many minutes of slightly slower driving for anyone behind me. If I could have started farther upstream of the jam, maybe I would have only needed to drive three mph slower than traffic.

Another thing that happened; I made it easier for other cars to merge, so I probably removed part of the jam in the adjacent lane. The jam was caused by drivers trying to merge into an exit lane. Drivers in the exit lane weren’t letting them in, so they sat unmoving in the next lane, causing a bigger jam. By inserting a big space, I wasn’t only taking a bite out of the jam ahead of me, I was also eating the jam in the other lanes.

I have a general principal I take from the above. ANTI-TRAFFIC DESTROYS TRAFFIC. Empty spaces can eat a traffic jam. While I was slightly slowing down to allow a space to gradually open up before me, I was creating a pulse of “anti-traffic”. When my anti-traffic pulse finally collided with the dense “traffic” of the jam, the two annihilated each other like a positron meeting an electron. It’s nonlinear soliton physics. The soliton waves destroy each other, leaving only a slight smudge behind.

My next thought; if I took several friends along on my experiment, we could have spaced our cars out over many miles. Each of us could have allowed a big blob of anti-traffic to appear. And then the successive impacts of anti-traffic could have completely erased the traffic jam at the Lynwood exit. When traffic is sparse, we cannot keep a large space ahead of us, since it is easy to pass a slightly slower driver. But a number of separate drivers could bring smaller spaces with them, and any traffic jam would succumb to the barrage of anti-traffic.

If you’d like to read all of Bill Beatys’ anti-traffic experiments and other cool scientific stuff, you’ll love his website at TrafficWaves.org. He has been online a longer than most of us and it’s chock-full of debates and rebuttals too, and not just about traffic jams.