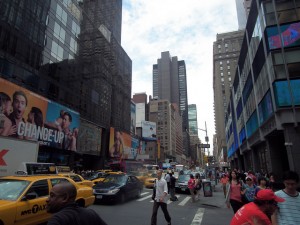 If you want to see a grown man cry, just tell any over-the-road driver that he has to go to New York City. And not because of the terrorist attacks. For as long as I can remember, drivers always hated to go to New York City (and Chicago too). Except the ones that live there. They love it! But for those who don’t live there, it conjures up images of trucks stuck under low overpasses, traffic jams and streets that are so narrow, you can never find enough room to turn off of them. Many drivers simply refuse to go. Companies have gotten used to that fact and some actually pay a little extra for it. PTL is one company that pays a New York City bonus. Some companies wont even go there at all.

Every trucker has a New York City story: 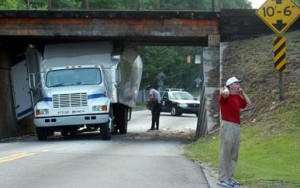 For every driver that refuses to go, there is a nightmare story and a good reason behind it. Truck drivers are reasonable people. So when one of them refuses to go, I am sure that they have a good reason. They usually get stuck in a situation that leaves them swearing to God that they will never go back there again. The patient ones have to go there again and get stuck two or three times before they start refusing to go. But unless you just love big cities, it’s only a matter of time before you too will say “I simply wont go there”.

I remember my first time. I saw a low overpass ahead and I knew that I wouldn’t clear it. My only choice was a side street that crossed the road I was on. I didn’t know whether I should turn right or left or back-up to the last busy street I passed. Neither choice looked good. I saw a cop in my mirror, so I put the parking brake on and ran back to ask for his help. In a strong New York accent he said, “Oh boy are you in trouble here. OK, follow me.”

He made a left turn onto a side street and within the first block, there was a car double parked and I couldn’t get around it. He ran the cars license plate on his computer and discovered that the owner lived right there. He knocked on the door and when it opened, he said, “Move your car, stupid”. One block later, there was another double parked car and he did the same thing again. After that car moved, we continued toward another side street and the officer took a left turn. He knew that I couldn’t make the turn, so he stopped his car and walked up to me to ask, “Which one of these cars do you need moved?” I answered, “This one and that one.” He tapped on his computer a few more times and then he and his partner each had a door to knock on. Ten minutes later, they came out of huge apartment buildings with the owners who finally moved their cars. Even with those cars gone, I still had to drive on the sidewalk to make the turn. Then there was another double parked car, then another. And then another tight turn. It took me over an hour to get back onto a busy street where I could finally move.

Truckers get robbed sometimes too. 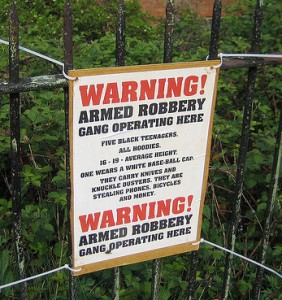 Being the city dweller that I am, I didn’t get discouraged. The next time I got a load going to New York City, I gladly took it. On the way there, I read an article in a trucking magazine that told a story about how truckers get robbed by people who act like they are giving you directions. They wait by off ramps. When you stop at the foot of the ramp, they politely ask you if you know where you are going. When you say, “No, I need some help”. They ask if they can get in. They’ll say, “It’s very difficult to explain and I am going that way anyway, so just let me in and I will show you. Then you can drop me off one block before your turn.” Of course when they get inside, they direct you toward a dark street and then they pull their gun out.

I was getting close to my destination when I tried to get directions on the C.B. radio. One driver told me approximately where it was, but he wasn’t exactly sure. He just knew it was somewhere down that way. It was late at night, so he added, “I wouldn’t go there now if I was you. You should wait until morning, that is a bad neighborhood.”

I couldn’t find a truck stop to sleep at and I started getting nervous when I came upon my exit. As soon as I stopped at the foot of the ramp, a man standing there asked me if I knew where I was going. I said I had an idea, but I told him the name of the company anyway, just to see if his directions would be similar to the directions that the driver on the CB had given me. He said, “It’s kind of hard to explain, but I am going that way anyway, so why don’t I just ride with you and I will show you where it is and you can drop me off right by there!”

I said, “No”, but he ran around my truck to the passenger door, which was locked. I took off and saw him yelling for me to stop. It’s a good thing that I read that article when I did. I am sure I wouldn’t have let him in anyway, but it still scared the crap out of me!

I received an email from a driver who told the following story as his “New York Nightmare”.

He said that he had to back into an alley, all the way to the end, which was a long city block in, to get to the dock that he needed. There was only one way into the alley, it was a dead-end and his customer was at the end of it. An hour later, when he was finished, he tried to get out but discovered that a brand new Porche was parked in his way, partially blocking the alley. He waited about an hour and when his patience ran out, he called the police. The officer came and ran the license plates on his computer only to find out that there was no record on file. He instructed the driver to “run it over”! He told the driver that he would be obstructing traffic if he didn’t run it over and not to worry about getting in trouble because he would never tell. So, the driver sized it up, squeezed his tractor around it and drove over it with his trailer tires, which totally flattened the hood of the Porche!

I saw it with my own eyes in Chicago once too. There was a truck trying to make a right turn on a busy corner. A car was parked in the bus stop so close to the corner that the driver would have hit it. He pulled his trailer tires right up to the hood of the parked car and stopped. He `indicated to the cop that this car was in his way and he would have to back up. To my amazement, the cop instructed him to drive over it, saying, “He shouldn’t be there anyway”.