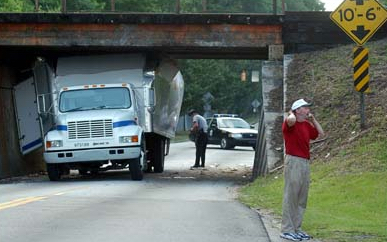 Oh crap! The sign ahead says 11 foot 8. I had better stop and find an alternate route. Well, that’s what most truckers would think when they see that sign. But apparently some pay it no attention at all. And I mean some of oblivious these drivers just plow right into it.

I just saw this video on Facebook, so I went looking for it on Youtube just so I could share it here. It’s a compilation of truck after truck slamming into an 11 foot 8 overpass. Most of them are rental trucks. A few are RV’s. And just a couple of semi trucks. But every one of them came out the other end a little shorter than they went in. You could say they got a haircut- a little off the top.

I used to work at a truck rental place when I was a young man living in Chicago. And I can’t tell you how many trucks got smashed into some of the low overpasses all over the big city. There is one particularly dangerous area known as Ravenswood, where some viaducts (as they are called in Chicago) are only 10 foot 8. We used to get our rental trucks back with windshields that hit those! I mean, come one, even a novice has to see that one coming. 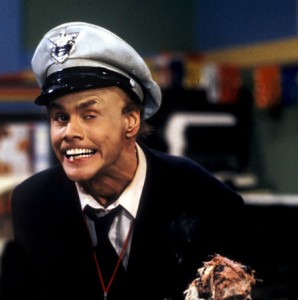 As Fire Marshall Bill would say, “Oopsie daisy.” I know this isn’t funny to truckers, especially those that have done this before. But still, it is entertaining to watch the video below. And while you’re at it, check out 11foot8.com for more videos of trucks smashing into the dreaded 11 foot 8 overpass. Ouch!

Truth be told, I actually hit one myself one day. Hey, I’m only human too. It’s a good thing I was going super slow. I didn’t do a lot of damage. I had a big machine on a flatbed trailer, and it looked like I was clearing it, but I knew there was a little gadget on top of the machine that I couldn’t see. So I inched along hoping for the best. Then, bump. It stopped me. I was in Houston during rush hour on a Friday afternoon. I had to back out, around a corner to get out.

There’s a Safety Meeting Topic for You- Watch Out for Low Overpasses!