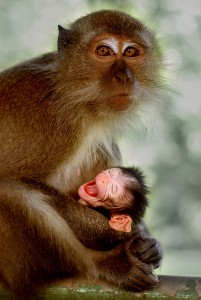 I once worked for a guy who said that he could teach a monkey how to drive a truck. Of course that was before his accident. He ran a bottling plant for a major soft-drink company. He was always hiring people who he thought were good at sales. Then, he would teach them how to drive a truck and send them out to sell soda. I always thought the opposite would be better. Take a truck driver and teach him how to sell.

Anyway, that was how I got my CDL back in 1982. I had some sales experience and so he hired me with those famous words. “I could teach a monkey how to drive a truck. I want to know if you can sell.” So, after convincing him that I could sell, he issued me a certificate for a written test and a road test. I had never before driven a tractor-trailer at the time. All I had to do was go to the DMV and flash those certificates and pose for my picture. Then I had a CDL. (Well, it wasn’t yet called a CDL, but it was a class D license, which was the same thing at the time.)

I proceeded to learn to drive a tractor-trailer on my own:

Don’t get me wrong, I appreciated the opportunity at the time. But I was a conscientious young man who really tried hard to be safe. I would have learned to drive a truck somewhere else if he didn’t give me the job. I really wanted to be a truck driver at the time and I had already driven tow-trucks, straight-trucks and was primed for a move up the trucking ladder, to tractor-trailer. Some of the people he hired, though probably good at sales, couldn’t learn to back a truck for weeks, even months.

Some of the conversations in the drivers room were about things like; how to shift gears, how not to use the clutch, do I really need to check my oil, what is a pre-trip inspection and many other things that a driver really should know already. It wasn’t funny, it was scary. There was always an occasional accident too and nobody ever got fired for hitting viaducts, parked cars, or anything, as long as they sold cases of soda.

The sales was the easy part.

All I had to do was go to my stops and see how much soda I could fit into the shelves that were predesignated to stock my companies product. Then fill up the shelves. Then, ask the store manager if I could build a nice display at the end of an isle, to sell some two-liters on sale this week. We got paid commission, so it was always a pleasure to build a nice display and shove as many cases as I could into it. The store manager would say yes or no and I would either build a display or not. It was that simple.

Driving was the hard part.

Almost every stop, I had to back into an alley or park in some spot that was not quite big enough for my truck. Often times I would have to park it on the street with a lot of traffic flying by while I unloaded my soda in the street. Every little (and big) store in town carried this brand and we drivers took our big rigs down small side streets, alleys, even on sidewalks to get to them. I remember one store that was at the end of a dead-end street. I had to back around a corner and then continue back for a full city block to get to it. Needless to say, this was very challenging to someone who never yet drove a big truck. Through trial and error, I learned the basics.

Delivering all that soda by hand with a two-wheeler was physically hard. And driving a truck in a big city was mentally hard. I learned something new every day while driving. Thirty years later, I still do. The sales aspect was by far, the easiest thing about that job.

My boss, the one who said he could teach a monkey how to drive a truck, sometimes would have to go run a route when a driver called in sick. He would skip customers who he thought weren’t important. He would just fly through the major accounts and not make any extra sales. Then he would come in early and say “that route only took me four hours, why does so-and-so take ten hours to run that route?” All the drivers used to talk about him behind his back too. We saw right through him.

He was a real know-it-all who made a lot of mistakes.

He got hurt one day, while directing one of his newly trained salespeople to back a truck into a small spot that only left two feet for him to stand next to the truck. So there he was against the wall, waving a hand to “come on back”. The newbie came back alright. He squeezed the boss between the side of the truck and a wall, breaking a few ribs. As soon as I heard about this, I sent him some flowers at the hospital. I didn’t say who sent them though. I just put an anonymous note on the flowers that read “a monkey can learn a sales pitch. Maybe you should try teaching truck drivers to sell.”

That was a silent victory for me that day. I never told any of the drivers about that note, but some of them suggested that he should try training drivers to sell instead of training salespeople to drive. I later sent him a real get-well card, wishing him a full recovery, which I did sign, along with several other drivers.

He did recover quickly and was back at work hiring salespeople and teaching them how to drive a truck. It was business as usual and he never mentioned that note. I tried to get him to hire my brother-in-law once, who had two years of tractor-trailer experience at the time, but he wouldn’t hire him because he had no sales experience. A few months later, my brother-in-law applied again, saying he was a salesman and got the job that time.

If you know any route-sales type companies that feel they could teach a monkey how to drive a truck, please send them a copy of this article. Maybe they will learn something.