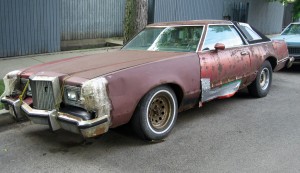 Ah, the fine art of beater control. I remember the day I made up the saying “beater control.” A good friend of mine reminded me of that the other day and we had a good laugh, so I thought I’d tell the story. It dates back about twenty-two years, when I was working as a supervisor at a local diaper delivery service.

Most of the delivery trucks the company had, which were step-vans, were in pretty bad shape. Oh, they had a few newer ones, but most of them were the kind of vehicle that you fill the oil and check the gas, if you know what I mean. They had several trucks with bungee cords holding the back doors closed because the hinges and door frames were so rusted out. Many of them had so much rust that you’d have to stuff a rag into a hole or two just to stay warm in the winter. Almost every morning, we’d see drivers filling fluids, changing tires or putting duct tape and bungee cords on everything. Many drivers had dirty hands before they made a single delivery.

The funny thing was, we had a mechanic. He was the highest paid employee too. He could often be seen sitting and smoking or reading the paper. I guess he figured that all of the easy stuff was the responsibility of the driver. And he always had plenty of duct tape when we needed it. And when it was something that we couldn’t figure out, he would huff and puff and get up to fix it. But he was always so grouchy that we hated to ask him for anything. I guess you can say that he had us trained to suit his work ethic (or lack there of).

Driving a beat up car was nothing new to me, so I really didn’t think much of it at the time. At that point in my life, I had never spent more than a few hundred dollars on a car. So, filling the fluids and tightening the clothes hangers was something I always had to do on a daily basis anyway. I think it was this happy-go-lucky attitude that got me promoted to supervisor in the first place.

Well, one day we hired a driver named Paul who turned out to be a life-long friend of mine. But the funny thing about Paul was, he never drove a beater before in his life. He never had to check oil because he always drove new cars. I had to teach him what I called “Beater Control.” I did all of the hiring and training of new drivers, so beater control became part of my training program.

Paul was a high maintenance employee. Every morning he would come into the office laughing with a complaint about his truck, as if it were some kind of a joke (which it was). One day, his heater only blew on his right foot, so I helped him move the hose and tape it into a more central location, where it would blow on both feet equally. He would have never thought of that on his own. The next day he would tell me that his power steering didn’t work and I would literally have to show him how to check and fill power steering fluid. He actually learned to like it because, like I said, he knew nothing about fixing cars but was now learning a little beater control.

There were certain neighborhoods that we delivered to that had a lot of kids around, which brought along other challenges. Any time it snowed, there would always be kids grabbing onto the back of the truck and “skitching” a ride. It was company policy to get out and chase them off, but sometimes you wouldn’t know they were back there. I guess we were an easy target for them because we were stopping every half block or so, as we putted through their residential neighborhoods to make deliveries. Plus, those step-vans had a big step on the back and door handles to hold onto. Every driver had a story about a kid who held on for a long ride and got taken too far from home, or one who grabbed a handle and pulled a door completely off.

One day, one of them opened my back door and an avalanche of dirty diaper bags fell out and left a trail throughout the neighborhood. By the time I noticed the trail behind me, it was over a block long. Needless to say, it took me a while to go back and pick them up. And, of course, some of the bags were busted so it became hazardous duty and rubber gloves were required.

Since then, thankfully, I’ve learned to spend a little more on my cars and to be a little more selective as to what I drive in general. When I started driving big trucks, I quickly learned to be a little more safety conscience. Duct tape and bungee cords just didn’t cut it when it came to a big truck, although I can think of a few companies who would argue that. Duct tape and bungee cords are no laughing matter, no matter how small your vehicle is. But, let’s face it, sometimes we just have to get by with what we have, not what we wish we had.

I can look back on those days and laugh now. But the truth is, I am very lucky to have gotten through it without an accident and so is the diaper service company mentioned above. In defense of them, however, I would like to add that it really is amazing what you can do with duct tape, bungee cords and wire clothes hangers. Those three things can offer a temporary fix when you are far from a real repair shop. They have really saved me a time or two. I still carry them with me because you never know when you might have to tape a hose together, or tie up a dragging exhaust pipe or drive shaft or something. Ah, the joys of beater control.

Been there, done that, you can have it.