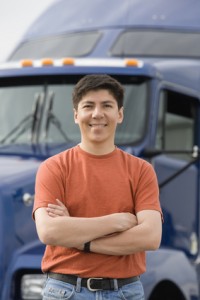 If staring at a computer screen all day or dealing with phones ringing off the hook isn’t your thing, maybe it’s time to think outside the corporate cubicle. When you’ve had your fill of traditional jobs, it’s time to consider a different field, and none is as traditional and nontraditional at the same time as trucking. For as long as manufacturers have been shipping goods from one end of the country to the other, truckers have been American icons of the working man. But the job itself is nothing like any punch-the-time-clock, nine-to-five work you’ve ever done.

A Specific Kind of Stamina

Truck driving is an entirely different world from other careers. The typical nine-to-five office job sees workers interacting throughout the day, in a team-based environment. No one really thought about the life of truckers until the lifestyle was portrayed through shows like “Ice Road Truckers” and “Shipping Wars.” These shows take us into the trucking business and, let’s face it, it’s tougher than we thought! With trucking, drivers are on their own most of the time. It’s not unusual for a trucker to go for a full 24 hours without talking to another human being. They spend most of their work hours in their trucks, even eating and sleeping in its confined quarters. The job is ideal for someone who enjoys having alone time, along with constant change of scenery and working for more days in a row in exchange for larger blocks of time off.

Not all truckers are heavy- and long-haul truck drivers. There are available trucking positions for drivers in sales and for light delivery, too. The easier the job, the lower the pay tends to be. The Bureau of Labor Statistics reports that the average pay for truck drivers is in the mid $30,000s up to the low $50,000 range, but CNN Money reports that a trucker can net up to $150,000 after paying for business-related costs like fuel, maintenance, truck payments and insurance.

Wanna-be truckers go through a training course that teaches them to handle the over-sized vehicle, followed by a test to receive your certification for a commercial driver’s license. This costs roughly $6,000. Compared to other jobs that require years of schooling and tens, if not hundreds of thousands of dollars, becoming qualified to drive a truck is relatively cheap.

If trucking sounds like just the change you’ve been looking for, it could be a lucrative career move. These days truckers are more than just the guys who haul in your groceries, clothing and house wares from afar. Truckers are their own breed of superstar, and who knows? You could end up on “Ice Road Truckers” or “Shipping Wars,” with the whole world watching you.

Jess is a writer from Colorado Springs, Co., who writes about cars, trucks and motorcycles.