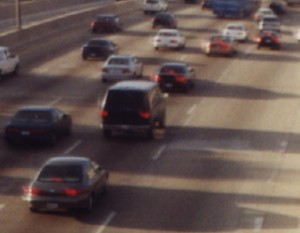 Take a look at this picture. There are four travel lanes. The one on the far right is ending, it’s an on-ramp.

Notice all of the brake-lights in the right travel lane? See the two cars trying to merge? Notice how trying to merge at the last second makes the highway stop?

The tailgater trying to merge (the one with the brake-lights on) should have driven slower or equal to the flow of traffic (not faster), then he would have seen the space he just missed. If he had two car-lengths of space in front of his vehicle, he could have merged easily, without making anyone step on their brakes.

If you have to step on your brakes when you merge, you didn’t do it right.

You could also say that the car in the right travel lane (not the on-ramp), tailgating behind the white car, caused this minor bottleneck, because he didn’t supply the space that the tailgater merging needed.

Scientifically speaking, space is the opposite of traffic.

There is a mathematical way to explain a traffic jam… Cars + trucks – space = traffic jam. We can combat traffic jams by bringing some space with us, in front of our own car or truck

Now, watch this video below.

You will notice the traffic waves that flow backward, against the flow of traffic. When a driver gets too close to the car ahead, he has to slow down. And that causes the one behind him to slow down even more.

Like the picture above, this video also proves what causes traffic jams: Not leaving enough space in front of your vehicle. If all these cars were to focus on following distance, rather than speed, there wouldn’t be a traffic wave. When the experiment began, all the drivers had the same space in front. But then some drivers got too close and had to slow down.