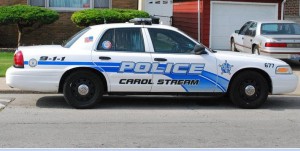 Carol Stream, Illinois. It’s kind of hard to talk when you have your foot in your mouth, but I can still type! I once said “I simply don’t get tickets”. And I really meant it. I figured if I always did everything according to the law, I would never get another ticket.

But I was wrong. No matter how hard I tried, I still did something illegal every once in a while. Sometimes a traffic light will turn red faster than expected and I would wind up going through a red light. Or someone parks in the street and I have to cross a solid yellow line to pass them. I like to think that common sense says that you have to bend the rules sometimes.

I mean, what would you do if you stopped at a red light and it never turned green? Eventually you would have to go through that red light.

This is what happened- One sunny day, during heavy afternoon traffic, I was waiting to turn left in a left turn only lane, on a four lane divided highway. The two oncoming lanes of traffic were stopped for a long time, blocking the intersection so that I couldn’t go. Every time a few cars would inch forward, the next cars would pull forward and block the intersection so that I still couldn’t go. I sat there for about four minutes and then I realized that if I was going to get across, I would have to just pull out and make someone stop. It was the only way, so I did.

The car that I cut in front of had plenty of room to stop and so he did. But, as I went across the intersection, I could see a lot of activity in that car, so I looked closer. The driver was punching his dashboard and shaking his fist at me with a red face that looked about to explode! He was screaming some obscenities at me, but I couldn’t hear him because my truck was loud. I thought to myself- he actually thinks that I slowed him down, when in reality he had to stop anyway.

So, as I continued, I looked in my mirror and saw him following me! He made a right turn from the left lane! And he was driving to his left, over the yellow line about a foot, where I could see him in my mirror. He was still wagging a finger at me and talking as though I could hear him. And he stayed right on my bumper.

I didn’t know what he was going to try to do. Maybe he just wanted to talk to me, or maybe he was really going to do something crazy. I didn’t know. I wanted to call the police, but my cell phone was out of reach. So I started taking mental notes of some details- He was by himself. An older guy with white hair, driving a green Ford Escort, two door hatchback. I wrote his license plate number on my hand.

Well, I wasn’t too scared of a Ford Escort while I was driving a Kenworth T-600, but at the same time, I didn’t want him to find out where I was really going just in case he was a psycho. So, I pulled into a big parking lot with a few truck drivers standing around. If he was going to try to start some trouble, I wanted some witnesses.

I pulled in and turned my truck around so that I was facing the road. I wanted to be sure I had a way out. I grabbed my cell phone and tried to continue driving forward and out of the parking lot. Then, he got out of his car and ran in front of my truck with arms flailing, stopping me. What if he would have pulled out a gun right then? I might have run him over, I really thought my life was in danger.

He ran up to my door on the drivers side, so I quickly locked it. He stepped up on my gas tank and screamed at me to, “Get the f&*# out of that truck right now”! I let the clutch out and started driving. I slammed on my brakes to try to shake him off the side of my truck, which it did. I let the clutch out again and dialed 9-1… Just then, two police cars pulled up very quickly. I was so relieved!

I stepped out of my truck in time to hear him yelling at the officers, “Give this S.O.B. a ticket for failure to yield, I’ll sign it!” And the officer replied, “Yes, sir”! This guy was the police officer’s boss! It turns out that he is not only a cop, he is the “traffic supervisor”!

He then proceeded to lecture me on failing to yield, his loud red face in mine, with spit popping out on every “p” he popped! I tried to tell him that he would have blocked my way if he continued. And that blocking the intersection was the real problem, if you look at the big picture. But, every time I opened my mouth, his mouth made a louder sound than mine. I was not able to get a word in, at all. He signed the ticket in the officer’s book and then he was gone.

His subordinate was a nice enough guy though. I explained to him that his boss was going to block the intersection. And he could plainly see that the intersection was still being blocked and other cars were cutting in front of people so that they could get across, just like I did. The officer agreed with me that the real problem with this intersection is the fact that cars always block it. And he vowed to start enforcing it! I hope he really meant that. His professionalism restored my faith in mankind, despite his boss.

I was soon on my way with a ticket in my hand and a court date on my calender. I went back to the intersection a few days later and took some pictures for court. I wanted to be able to show the judge that the real problem was the cars that block the intersection.

The judge dropped the charges when I explained it to him. (Whew!) And “road rage with a badge” never showed up. I was afraid he would be there and the judge would take his side. But I got lucky.

I can’t imagine how someone like that got to be a traffic supervisor. They should demote him to traffic school student, and promote his subordinate to traffic supervisor. He must have received his promotion based solely on his years of service because he surely didn’t have the knowledge or the self control to be a police officer, or especially a traffic supervisor. Maybe he was just having a bad day. Or maybe he really just hates trucks. I guess I’ll never know unless I meet him again. And I hope I never do.

I wonder if he woke up the next day realizing that he was wrong? I doubt it.

He probably thinks he taught me a lesson. Actually he did. But not the lesson he was thinking. What I did learn from this incident is that just because someone is a traffic supervisor, or a cop, that doesn’t necessarily mean that he understands traffic.