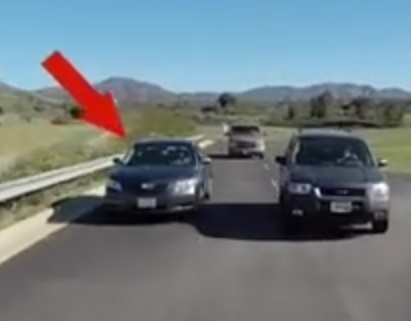 Truck drivers just hate it when a 4-wheeler cuts in front of them and stops. I’ve heard that said by a whole bunch of drivers over the years, and even said it myself a time or twelve. But what about when they do it on purpose? Oh yes, it happens. I call them accidents on purpose. But most insurance companies call them staged crashes. There are people out there who literally make their living doing just that. I’ll get into the details of the most common ways it happens, and what you can do to protect yourself.

The swoop and squat.

The most common staged crash, by far, is the swoop and squat. It usually involves two or three vehicles. They love to target trucks too, because they know trucking companies have great insurance. Not only that, but a semi truck is sure to cause a lot of damage when it strikes a car.

What they do is, they approach their target victim from behind, then pass, one by one. The victim thinks three cars are about to pass him, one by one. The first car passes quickly. The next car passes almost as quickly. But the third car will act like he’s passing, but instead will just stay right next to the victim’s car or truck- this prevents the victim from being able to switch lanes. At that very moment, the one in front of the victim slams on the brakes. And with nowhere to turn, the victim has no choice but to rear-end the scammer, who, of course will have all kinds of fake injuries. Here’s a great swoop and squat video to illustrate it.

Usually when two lanes merge into one, as the cars politely take turns letting each other in, one will just jam on thew brakes hard for no apparent reason, causing a rear-end collision. The scammer knows that a lot of drivers, even those who normally never tailgate, do in fact tailgate for a second or two whenever a car cuts in front of them.

Solution? Whenever a car cuts in front of you, you simply have to slow down. Don’t just truck along with your cruise control on. You have to be aware and maintain a safe following distance, even if it’s just for a second or two. That’s all these clowns need to make their move. And this can be done by one car.

Some people drive around looking for these opportunities. You have to know about it, and expect it to make sure it never happens to you.

People throw themselves in front of your car or truck.

You’re driving along, without a care in the world, when a person standing on the side of the road suddenly jumps in front of your vehicle. Even if you stop in time, they hit the ground yelling for an ambulance. And guess what else? They have a couple of friends who “saw the whole thing”. You can’t win. The only thing that can save you from this scam is a dash cam. A dash cam is insurance.

This one is actually funny, if you watch the video below. But what if these people didn’t have a dash cam? Some of them would be getting sued right now. It’s a frightening thought, to hit a pedestrian. And when the cops show up to make their report, they’ll likely think you are a bad driver if they happen to believe the so-called witnesses, who will likely say you were driving too fast, or not looking.

Youtube is chock-full of videos that illustrate insurance fraud attempts and fails. But the only reason the fraudster failed is because the victim had a dash cam. I wouldn’t drive without one. You can find a budget dash cam easily these days. Technology is getting cheaper and better.