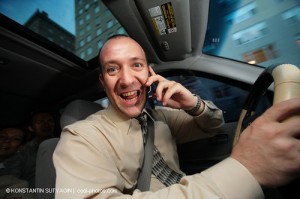 With the introduction of new state laws that ban the use of handheld cell phones while driving, many people have adopted hands free devices. These devices fit snugly in the ear or attach to your vehicle and allow the driver to carry on a normal conversation while operating a car. While many people think that using a hands free device is a safe way to make and receive calls while driving, studies have shown that cell phone use can still negatively affect driving ability.

Experts warn that it is not the dialing or answering of the phone that is dangerous, it’s the diverted attention that talking and driving requires. Carrying on a conversation requires use of the mental reserves that would otherwise be devoted to driving. When a driver is using a cell phone – either hands free or handheld, they may focus more on the conversation and less on the act of driving or concentrating on traffic. In 2009, the National Safety Council released a report that ranked distracted driving as or more dangerous than drunk driving and fatigued driving. The Council also reported that the likelihood of a fatal accident was greater when drivers used cell phones behind the wheel.

A False Sense of Security

Before the explosion of hands-free devices, drivers kept their conversations to a minimum while driving and in some cases, pulled to the side of the road to make a call. Overall, drivers were acutely aware of the dangers of driving while distracted and took proactive steps to minimize the risks. With the use of hands-free devices, drivers feel a false sense of security that allows them to think their phone use is harmless. This leads to longer and more detailed conversations that increase the risks of an accident.

The act of sending and receiving text messages while driving is inherently dangerous and has been responsible for a high number of traffic fatalities in recent years. Texting while driving is a problem that is especially rampant among drivers under 25, and has no signs of decrease, despite heavy campaigns warning of its danger. Texting means you must type messages while looking at the cell phone screen. Many drivers use both hands to send and reply to text messages, and may often steer with their knees while texting. This is a dangerous practice, especially among younger drivers who may be overconfident in their abilities.

While cell phones are a modern technology that has made life simpler in many ways, they are still a dangerous distraction when used while operating a motor vehicle. Placing and receiving phone calls, holding conversations and replying to text messaging has been shown to be, in some cases, more dangerous than drunk driving. Using a cell phone while driving can even increase your car insurance rate if you are involved in an accident. If you need a new insurance policy, some insurance companies will provide an accurate quote or connect you to companies that reward safe drivers.