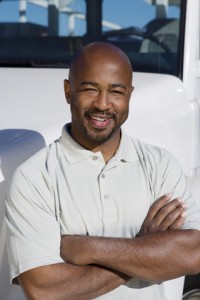 Truck drivers have to put up with a lot of stupid people: Dispatchers who don’t write things down and then later deny the knowledge of something they should have known, shippers who make you stand around and wait when you have another appointment fifteen minutes ago and you could really use a nap, payroll departments who don’t pay on time because they didn’t understand plain English staring them in the face, crazy drivers who cut you off and then stop, tailgaters that don’t let you switch lanes, people giving you directions that don’t know their left from their right, or the difference between east 35th street and west 35th street, the list goes on.

Needless to say, trucking can be a very challenging job.

Stress levels rise and fall all day, every day. An average day for a trucker would feel like an emotional roller-coaster ride to anyone else. Many would-be truckers can’t take it, once they taste it and they wind up quitting and going to work in a factory or an office. Or, they simply don’t learn patience quick enough and quit.

Being a trucker takes a certain toughness, that comes from the gut. I think that’s why a lot of truckers have a big one. You either have it, or you don’t. It takes someone with strong character to do this job. Someone who can brush off difficulties as if it were nothing and keep going.

One way not to let all the aggravation get to you, is to realize that everyone is not as smart as you are. It’s really true. If you have been driving a truck for more than a few years, you are a rare breed. A survivor. One who takes it on the chin and still stands. You are the type of person who sees danger ahead and keeps going in that direction, knowing that you will make it through. You believe in yourself and that is why you will always make it.

A weaker person would turn around and run from the things you think are nothing much. You are one smart cookie (and a tough one too). Know it and take pride in that fact, because it’s true. Unfortunately, everyone is not as smart as you are. I know you wish they were. But unfortunately they are not.

Some are, don’t get me wrong. I’m not saying truckers are the only ones with any brains in this business (it just seems that way most of the time). There are a lot of smart people in all aspects of the trucking industry. And believe me, it is a pleasure dealing with those who know what they are doing. So, if you are lucky enough to have a good dispatcher, or get some good directions, or deal with a shipper who is quick, safe and accurate, let them know that you appreciate them. I’m sure they don’t hear it enough.

It’s not easy dealing with all the stress in this industry.

What works for me, may not work for you, and visa-versa. But we all have to deal with it in our own way. I took a mini-survey one day and asked five drivers how they deal with stress and overcome the emotional roller coaster that is trucking. The fat one said he eats a lot. The tanned one said he takes several vacations each year and always has one in mind to look forward to. The funny one said he pictures a clown on the other end of the phone and at the wheel of all the four-wheelers. It’s entertainment to him. He laughs it off. Two of them agreed that they don’t get mad at the incompetent people; they feel sorry for them and count themselves as the lucky ones.

A lot of truckers think they know-it-all.

They’ll argue and hold their ground on what they believe, no matter what some people say to them. Their victims usually walk away thinking they can never win an argument with such a know-it-all. Many of them actually do. That’s right, you heard it here first. Many truck drivers actually do know it all. So when one speaks, you should listen. Grant them the possibility that, just maybe, they are right and you are wrong and who knows, you might learn something.

Many drivers come from many different backgrounds and somehow they wind up driving a truck. I have met some of the most unlikely characters, from all walks of life and from many different countries too. They get tired of one thing and are attracted to trucking because of the freedom of the job, or maybe they love to travel, or whatever the case may be. I have met professional fishermen, wrestlers, schoolteachers, musicians, writers, filmmakers, actors, salesmen, carpenters, mechanics, chefs, even a pearl harvester once. You never know who may be at the helm of the truck next to you.

Almost any question that you can think of can be answered by simply picking up your CB mic and asking. With that in mind, you can’t deny the fact that collectively, truckers actually do know it all.

I saw a small sign hanging on a wall in an auto parts store once. It said “those of you who think you know it all are very annoying to those of us that do”. This is very true in trucking too.

Thanks for reading this. Go ahead and leave a comment. I love hearing from fans and critics.